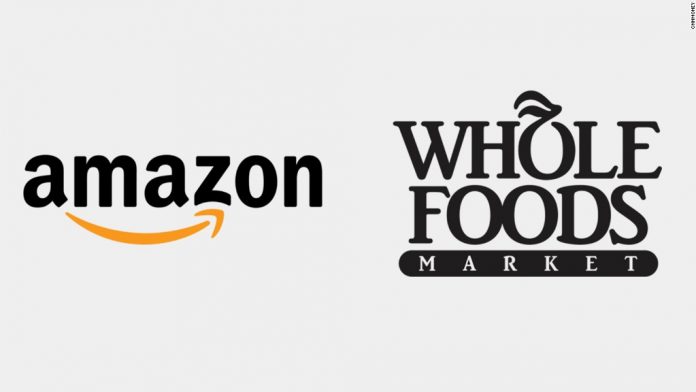 Amazon.com sent a shock wave through the grocery industry Friday when it announced plans to buy Whole Foods Market and formally enter the world of bricks-and-mortar retail.

The $13.7 billion deal brings to a head a years-long battle brewing between Amazon, the online darling, and traditional retail powerhouses likes Walmart. And it shakes up a U.S. grocery industry that has been struggling to keep up with growing competition, both in stores and online. Amazon, which for years has been testing new technology and innovations in quiet corners, would now have a network of physical locations to test and implement those ideas.

News of the deal sent shares of traditional retailers like Walmart, Target, Costco and Kroger tumbling as much as 13 percent as investors tried to digest the implications of an Amazon-backed grocery chain.

“This deal should leave no doubt that Amazon is deadly serious about dominating all aspects of retail,” Paul Cuatrecasas, chief executive of Aquaa Partners, a London-based investment banking firm, said in an email. “This deal has dramatically flipped the table on traditional companies. Amazon is effectively saying that if retailers are going to tool themselves up with technology, then they will tool themselves up with a physical presence and high-street brand.”

Amazon has recently begun experimenting with bookstores and a small grocery, but this is by far its most ambitious move into physical retail. The Seattle-based company was recently granted a patent for technology that would block shoppers from comparing prices from their mobile devices while they’re in stores.

In Whole Foods, Amazon is acquiring a company that has recently come under pressure from investors for its lagging performance. Whole Foods, whose fleet of stores now numbers more than 430 locations, has found it difficult to attract more mainstream consumers as Walmart and other large chains have stepped up their sales of natural and organic products.

The organic grocer, which was founded in 1978, would continue to operate under its existing brand. Whole Foods chief executive John Mackey would remain CEO after the purchase, and the company would keep its headquarters in Austin. The merger offers a test of whether Amazon, which has generally built its business on low prices, can successfully integrate a grocer known for premium service and higher prices.

“This partnership presents an opportunity to maximize value for Whole Foods Market’s shareholders, while at the same time extending our mission and bringing the highest quality, experience, convenience and innovation to our customers,” Mackey said in a statement.

The deal is sure to put new pressure on Walmart, which has been aggressively expanding its online business in hopes of winning over consumers. The Bentonville, Ark.-based retailer announced Friday that it had agreed to buy online clothing company Bonobos for $310 million. The deal comes just months after Walmart’s $3.3 billion purchase of Amazon competitor Jet.com.

The Whole Foods deal is expected to close in the second half of 2017, pending shareholder and regulatory approvals. Antitrust experts said the purchase is not likely to raise red flags, even though it would bring together two major retailers.

“Generally speaking, there is very little overlap between these two companies,” said Michael Carrier, a Rutgers Law School professor who specializes in antitrust issues. “They’re not really competitors. Add to that the fact that Whole Foods doesn’t have the dominant positioning it did even a few years ago, and that makes it even more likely for this deal to go through.”

The $42 a share offer from Amazon is a 27 percent premium over Whole Foods Market’s closing stock price on Thursday.

Amazon, which is sitting on $21.5 billion in cash, has long eschewed big acquisitions. Among the company’s largest acquisitions are its 2009 purchase of online shoe retailer Zappos.com for roughly $1.2 billion, and video game streaming site Twitch, which it bought in 2014 for roughly $1 billion.

“Whole Foods Market has been satisfying, delighting and nourishing customers for nearly four decades – they’re doing an amazing job and we want that to continue,” said Jeffrey P. Bezos, founder and chief executive of Amazon.com.