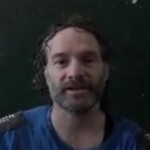 Peter Theo Curtis, an American journalist kidnapped in Syria almost two years ago, has been freed and handed over to the UN. The release of Curtis comes just days after a different U.S. journalist, James Foley, was beheaded by ISIS. Back in June, a video of Curtis was released which showed him slightly disheveled, but in good health. He had been abducted in Antakya, Turkey while trying to enter Syria.

Multiple journalists have been abducted covering the Syrian civil war, and many are still missing. Read more at Al Jazeera.