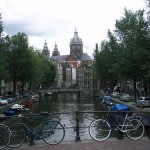 A plan to link Amsterdam and Tel Aviv as twin cities was dropped on Thursday after the Dutch capital’s mayor, Eberhard Van der Laan, came under fire from pro-Palestinian activists.

Van der Laan has been an outspoken admirer of Tel Aviv, often noting its impressive start-up scene and its gay-friendly atmosphere. He attended the annual Tel Aviv Gay Pride Parade earlier this month. But after announcing the twin cities plan, Van der Laan faced an extreme backlash from the pro-Palestinian community as well as the Dutch political left.

Dutch News reported that the left-wing GroenLinks party’s leader, Rutger Groot Wassink, said there would be no twin cities deal “as long as Israel occupies Palestine, structurally infringes human rights and continues its settlement policy.” He was echoed by members of the Labor and Socialist parties, who said they were also not prepared to support the twin cities arrangement.

In an effort to reach a compromise, Van der Lan suggested that Amsterdam could also become sister cities with the de facto Palestinian Authority capital of Ramallah, but his critics refused to accept the idea and the twin cities initiative was scrapped.

Van der Laan said he still plans to advance cooperation between Amsterdam and Tel Aviv, though the specifics of that cooperation have not yet been announced.