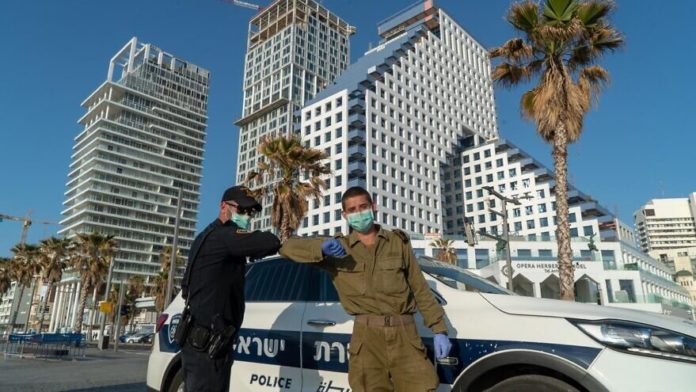 As the Israeli cabinet weighs increasingly stringent steps to deal with the growing numbers of confirmed coronavirus cases, the Israel Defense Forces’ Home Front Command is playing an increasingly essential part in the state’s fight against the pandemic.

The Home Front Command is the military’s main interface with the civilian population, and it is tasked with helping the civilian domain prepare and respond to a range of emergencies. Currently, its headquarters south of Tel Aviv is hosting the IDF’s Coronavirus Command center, which recently began taking over the national epidemiological tracking efforts. The center has also relocated more than 50,000 people to “corona hotels” since being established in August.

The Home Front Command is operating 21 such hotels—17 for confirmed patients, and four for those who require isolation and who cannot isolate at home.

Most of those with the virus at the hotels have little to no symptoms, with the occasional fever, and do not require hospitalization, explained Col. Michael Gilinski, the Jerusalem Home Front District Commander Chief of Staff in reserve duty.

His own district runs nine coronavirus hotels that cater to a range of populations. “We attempt to provide them with all of their needs and give them the optimal conditions for recovery,” said the officer.

That includes making their stays comfortable, providing food—kosher food for the religious—and any other needs that need to be accommodated while they’re there.

“The goal is to remove them from the community to disrupt the infection chain,” said Gilinski. “We’re now getting ready for the High Holidays and Sukkot, which is no easy task. Every hotel is seeking to create its own suitable response and to figure out what requirements it needs to cater for.”

‘There is a meticulous observance of the guidelines’

Caring for large numbers of people is intensive, and the Health Ministry provides the Home Front Command with guidance throughout, he said, setting the conditions for who is authorized to enter and leave the hotels.

Using the Home Front Command’s command and control system, the military tracks every “guest” who enters the isolation centers, placing them on a “track” that begins with their arrival and ends when they have neutralized the virus.

Those needing isolation arrive either by bus or ambulance, arranged for by the military, and are allowed to leave the hotel after receiving approval from their health maintenance organization and their doctor.

In line with this system, which is designed to strictly control movements and prevent infections, those staff authorized to enter the yellow zones can clean rooms, distribute food and conduct maintenance tasks, while the green zone staff carries out management and lobby-related tasks.

Every hotel has its own Home Front command center with a computer network that manages operations. On-site soldiers are similarly divided into yellow and green zone teams.

“Throughout the past five months of activating the hotels, we do not know of any soldiers or personnel who became infected at the hotels. There is a meticulous observance of the guidelines. We have had personnel infected while outside,” said Gilinski.

Military instructors refresh the guidelines continuously for the hotel staff, and cameras are used to supervise personnel to ensure that safety guidelines are being met. “Where we see that a loosening of procedures has occurred, we respond by having extra guideline refreshers,” stated the officer.

The Home Front Command’s Jerusalem district stretches from Ma’ale Adumim to Palmachim Beach, and from Gedera to Petach Tikvah, covering almost a third of Israeli civilians.

During more normal times, it prepares for emergency situations like missile attacks and earthquakes.

The current hotel operations are building valuable operational experience, he added, to both soldiers and commanders.

The command has been running the hotels since mid-March and has since developed an entire activation doctrine for them.

It has also given the command opportunities to build new bridges with populations that have not been exposed to it in the past, including the ultra-Orthodox populations, Arab Israelis, new immigrants and foreign workers from China and India, said Gilinski.

“These connections will reverberate in the future,” he added. “The connection to the haredi population has been very interesting to watch. This population, which never previously had direct contact with IDF soldiers and the Home Front Command, is now seeing an organization that has come to serve and assist them. Soldiers have been getting quite a few ‘thank you’ letters, chocolates and gifts.”