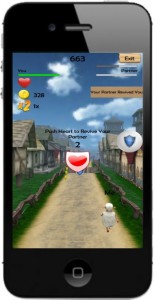 Bandura Games, a computer gaming company based in San Francisco, California, is set to launch a new mobile game app that would bridge gaps, build connections and create empathy between people from different sides of conflict zones.

Initially interested in the Israeli-Palestinian conflict, Justin Hefter, Bandura Games CEO traveled to Israel in the summer of 2014 to see if he could find a way to use games to bring Israeli and Palestinian youths together.

In an interview with Tazpit News Agency, Hefter explained what set him on this path. “I graduated from Stanford University with a degree in public policy in 2011. One of the things I did as an undergrad was work with Jewish and Muslim students on campus to come up with events to bring people together.”

“I always wanted to take those experiences that brought people together and scale them up. So in 2014 I left my job and traveled to Israel to see if there was a way I could use games, online video games, as a way of bringing Israelis and Palestinians together,” Hefter told Tazpit.

It was on that trip that Hefter met with Israeli, Etay Furman and Palestinian, Ammoun Dissi, and together they began researching Israeli and Palestinian gaming preferences. While conducting interviews and play-testings in Israel and the Palestinian Authority, the team realized the full potential of their idea and shifted from focusing on just one particular conflict zone to creating a game that can be used globally.

“We realized that we had an opportunity to bring youths together not just across the Israeli-Palestinian divide, but really around the world, across any divide. Whether it’s India-Pakistan, China-Taiwan or the Democrat-Republican divide in the United States,” Hefter recounts.

Thus, Bandura Games was founded in 2014 by three partners from the United States, Israel and the Palestinian Authority, with a mission to bring people together through cooperative play mobile games, with the ultimate hope of making the world a less violent and more understanding place.

Currently, with a staff that is both multinational and multicultural, Bandura Games has launched its Indiegogo campaign, #FunWithoutBorders on Tuesday September 29.

The crowd funding campaign is meant to raise an initial sum to jumpstart the creation of a mobile-phone cooperative game called RunZoo. In less than 24 hours, #FunWithoutBorders had raised over $29,000 out of its $37,000 goal.

“It has blown up, people are pretty excited about it and now we really hope to share it with the world,” says Hefter.

Bolstered by peer-reviewed scientific studies that posit that cooperative play and working toward a common goal can induce empathy, foster personal bonds and forge trust between strangers and adversaries, Bandura Games designed RunZoo so that it can only be won through teamwork.

“Even as of two weeks ago a new study came out of the university of Aarhus, Denmark, showing that when people play cooperative games, as opposed to competitive games, people’s heart rates begin to sync up,” explains Hefter. “Another study from McGill University found that people who are total strangers can become friends after just 15 minutes of playing a game together.”

The game is nonviolent and it incentivizes players to make friends with other players in different countries. Initially, team-ups are anonymous, however, during the progression of the game, players find out about their teammates, and can they become friends.

“You are randomly paired with a person around the world, in the course of the gameplay you complete joint missions, overcome obstacles together and save each other’s lives,” Hefter explains the mechanics. “Only after you met a critical threshold of partnership do you then find out who that person was, where are they from, and you see your overlapping likes and interests.”

Hefter explained that the random pairing is based not on differences between players but upon similarities, “When we interviewed Israeli and Palestinian kids we discovered that both groups enjoy the same kinds of music, games, food, the same kinds of fun. More so than, say, Israelis and Americans.”

“What you end up seeing is that by pairing people based on their similar interests in music or food you are actually going to end up having people from across conflict zones playing together, and that is the whole point.”

RunZoo is expected to launch later this year, and will be made available for iOS and Android phones as well as tablets by next summer.