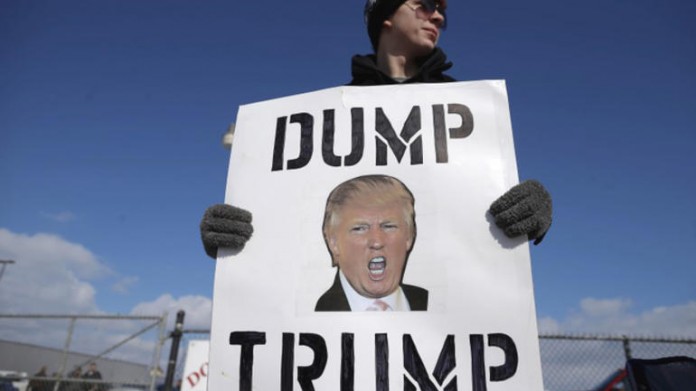 Britain’s Conservative Party is moving to restrict the ability of the unelected aristocratic House of Lords to block the will of the British people as expressed through their elected representatives in the House of Commons. What an interesting idea, that every citizen’s vote should have the same weight, and one man should not have, in essence, more votes and greater say because some ancient king put a gold coronet on his ancestor’s head to reward him for his military service in a battle centuries before.

It is thus ironic that while the Tories are going in one direction in Britain, certain self-proclaimed leaders of the Republican establishment in the United States are moving in the exact opposite one and are seeking to use arcane convention rules and the funds of shadowy billionaires, promised in smoke-filled backrooms, to deny the 2016 Republican presidential nomination to Donald Trump, who, after the dust has settled from Super Tuesday, has almost certainly earned it.

The depth and breadth of Trump’s successes in the first 15 states to vote 15 states that had voted when this column went to press have been, well, to quote Trump himself, huge. Nine of his 10 victories were by wide margins. And where he has not won, he has generally been close behind the winner. He has shown dominance in states in the South, in New England, in the Mid-Atlantic and in the West, making him the only candidate to show strength outside his home turf and with a national campaign. He has won with evangelical Christian voters in the South and Hispanic voters in the West. And perhaps most important, he is bringing out hundreds of thousands of new voters, nearly quadrupling the Republican primary turnout in Virginia from just four years ago.

Democratic voters participating in primaries and caucuses at this point eight years ago outnumbered Republicans by almost 2 to 1, but this year that has flipped, giving Republicans a similar advantage. There is no doubt this is due to Trump and the legions of new people he is bringing into the political process.

I was first elected to Congress as part of the Reagan landslide in 1984, and if anything this year is clear to me, it is that Trump is reassembling the Reagan coalition and making it bigger and stronger and more diverse than ever before.

In light of this, it is stunning how the Republican establishment and the donor class in Washington have struggled in vain against Trump, while he has been simultaneously connecting on a personal level with so many voters across the country. Undoubtedly this is because Trump is an agent of change, change that tens of millions of rank-and-file Republicans desperately want, and change that the Republican establishment in Washington will do anything to avoid.

The chicanery going on in Washington today threatens to divide the Republican Party, not just for this election cycle but also perhaps for a generation. At the core of American democracy is the principle that one person equals one vote and that when “We the People” have spoken, that voice is respected. If Trump receives more votes in Republican primaries and caucuses than any other candidate, and if he receives more delegates to the Republican convention than any other candidate, any plan cooked up to force a brokered convention or other such nonsense could relegate the Republican Party to the dustbin of history.

If the Republican establishment does not like Trump’s ideas, it should try to beat him fair and square, by capturing the hearts and imaginations of the voters, as Trump has done over the past six months. If it can beat him fair and square, with a majority of votes and a majority of delegates, then the party – including those of us who support Trump – will come together behind the eventual nominee. But if the nomination is stolen from Trump through shadowy billionaire super-PAC money and “brokered convention” chicanery, I sadly predict that the party that I love and have helped to build for more than half a century will suffer a massive schism that may send it the way of the Whigs.

It has taken the British Parliament nearly a thousand years to wrest power away from the lords and nobles and place it where it belongs, with the commons. My beloved Republican Party has a little more than two weeks to figure this out before its establishment wing risks permanently dividing itself from “We the People.” I hope and pray the lesson is learned in time.