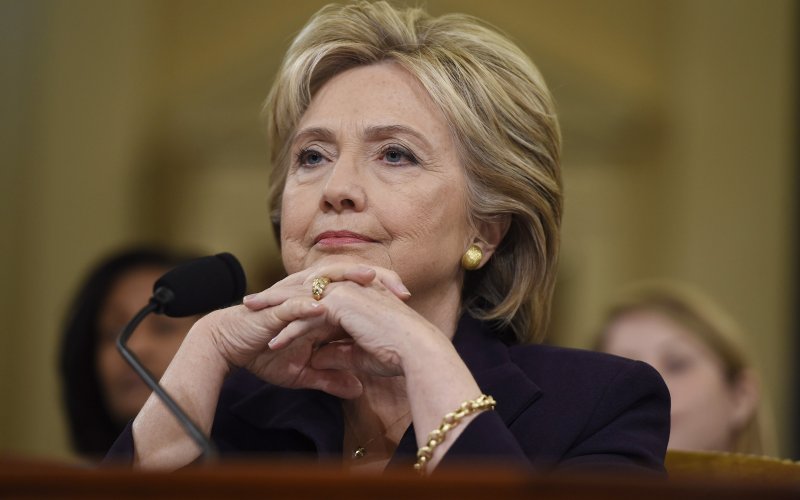 One of the two big dominoes in the Hillary Clinton email controversy toppled Wednesday: The State Department’s inspector general released its report on the email practices of Clinton and a number of other past secretaries of state. (The other major domino is, of course, the FBI investigation into Clinton’s decision to exclusively use a private email server while serving as the nation’s top diplomat.)

The report badly complicates Clinton’s past explanations about the server and whether she complied fully with the laws in place governing electronic communication. And it virtually ensures that Clinton’s email practices will be front and center in Donald Trump’s fusillade of attacks against her credibility and honesty between now and Nov. 8.

Here’s the key passage from the Post article on the report:

“The inspector general, in a long awaited review obtained Wednesday by The Washington Post in advance of its publication, found that Clinton’s use of private email for public business was ‘not an appropriate method’ of preserving documents and that her practices failed to comply with department policies meant to ensure that federal record laws are followed.”

Clinton used an inappropriate method of preserving her documents. Her approach would not have been approved if it had been requested by a more junior member of the State Department staff. The report also suggests that despite a Clinton aide’s insistence that the method of preserving her emails had been submitted to a legal review back in 2010, there is no evidence that such a review took place. And, here’s the kicker: Clinton refused to sit for a formal interview.

Oomph. Double oomph. Heck, that might merit a triple oomph.

The Clinton campaign will push back hard on this report – as it has against anything that suggests she was at all in the wrong in the creation and protection of her email server. Here’s how her press secretary, Brian Fallon, put it on Twitter:

“GOP will attack HRC because she is running for President, but IG report makes clear her personal email use was not unique at State Dept.”

Clinton’s team has spent months casting the State Department Inspector General’s Office as overly aggressive and working hand in hand with congressional Republicans to cast the former secretary of state in the worst possible light.

That’s a very hard story to sell given that the current inspector general was appointed by President Barack Obama. It is, by the way, the same problem Clinton faces when she tries to cast skepticism on the ongoing FBI investigation. This is an FBI that is overseen by an attorney general – Loretta E. Lynch – who was also appointed by Obama. It’s tough to make the case that a Democratic administration filled with Democratic appointees are all somehow out to get the presumptive Democratic nominee for president.

Then there is the argument, which Fallon makes above, that Clinton was far from the first secretary of state to use less-than-airtight methods to ensure the preservation and security of her email correspondence. As the IG report makes clear, she wasn’t. Again, the Post report:

“The 83-page report reviews email practices by five secretaries of state and generally concludes that record keeping has been spotty for years.

“It was particularly critical of former secretary of state Colin Powell – who has acknowledged publicly that he used a personal email account to conduct business – concluding that he too failed to follow department policy designed to comply with public-record laws.”

There are two very important differences among Clinton, Secretary of State John Kerry, and former secretaries Powell and Condoleezza Rice when it comes to email practices.

The first is that Clinton is the first and, to date, only secretary of state to exclusively use a private email address and server to conduct her business as the nation’s top diplomat. All of the other names above maintained both a private and a government-issued email address. That alone doesn’t make her guilty. But it does make her unique.

Second, Clinton is the only one of that group who is currently (a) running for president and (b) the very likely nominee for one of the country’s two major parties.

Because of her elevated status in our political world, she is – and should be – subject to more scrutiny than, say, Powell, who hasn’t voiced an interest in running for president in 20 years. That’s particularly true because Clinton has put her time at State at the center of her argument for why she should be elected the 45th president of the United States. Look at what I have done and judge me by it, she says. That has to include the bad as well as the good.

This is a bad day for Clinton’s presidential campaign. Period. For a candidate already struggling to overcome a perception that she is neither honest nor trustworthy, the IG report makes that task significantly harder. No one will come out of this news cycle – with the exception of the hardest of the hard-core Clinton people – believing she is a better bet for the presidency on May 25 than she was on May 23.

Clinton remains blessed that Republicans are on the verge of nominating Donald Trump, a candidate whose numbers on honesty, trustworthiness and even readiness to lead are worse – and in some cases, far worse – than hers. But Trump’s task of casting her as “Crooked Hillary” just got easier.