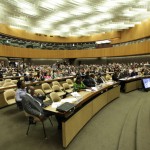 Here is the statement from the UN Human Rights Council establishing a “commission of inquiry:”

The President of the Human Rights Council, Ambassador Baudelaire Ndong Ella (Gabon), announced today the appointment of Amal Alamuddin, Doudou Diène and William Schabas to serve as members of the independent, international commission of inquiry to investigate all violations of international humanitarian law and international human rights law in the Occupied Palestinian Territory, including East Jerusalem, particularly in the occupied Gaza Strip, in the context of the military operations conducted since 13 June 2014. William Schabas will serve as Chair of the three-person commission mandated by the Council at its last special session.

June 13? Operation Protective Edge began on July 8. So why is the UN choosing June 13?

The answer tells you all you need to know about how biased the UNHRC is.

Israel started searching for them in the Hebron area on June 13.

The commission is being given a framework where they are supposed to believe that the kidnapping and murder were not acts of aggression, but Israel’s response was.

While it is true that the next paragraph tries to stave off this criticism by saying “whether before, during or after,” the very mention of that date and not the day before shows that its mandate “to establish the facts and circumstances of such violations and of the crimes perpetrated and to identify those responsible, …all with a view to avoiding and ending impunity and ensuring that those responsible are held accountable, and on ways and means to protect civilians against any further assaults” is directed only at Israel and not Hamas.

Hamas has never been accused of “impunity.” That is a NGO keyword that only applies to Israel in the context of this conflict.

This is not a mistake. Diplomats are very careful with statements like this, and using the words “military operations conducted since 13 June 2014″ shows that the UNHRC does not consider the kidnapping and murder of the teens to be within the mandate of the commission – only the Israeli response.

Kidnapping and targeting civilians is a war crime, by the way, so the choice of June 13 is a very deliberate attempt not only to portray Israel as the initiator of the hostilities but to whitewash Hamas war crimes.

The mandate for the Goldstone inquiry was more explicit in blaming Israel for starting the 2008-2009 war, calling to “dispatch an urgent, independent international fact-finding mission, to investigate all violations of international human rights law and international humanitarian law by the occupying Power, Israel, against the Palestinian people, particularly in the occupied Gaza Strip” – even though Hamas had declared war on Israeli civilians two days before Cast Lead.

Creating a false framework is a favorite methodology of diplomats to stack the deck against Israel without having to lie. When a commission is told what to look for, they will generally not expand that mandate to look elsewhere. And this commission is being told clearly that Israel’s response to terror is not a response at all, but a military aggression for no other reason besides Israel being inherently aggressive.

Of course, it also means that the commission can include the West Bank in their kangaroo court so as to maximize Israel’s perceived aggression and minimize any importance of Hamas rockets and terror tunnels.

The UNHRC knew exactly what it was doing when it created this commission, and its anti-Israel bias is built in to whatever the report says just from the mandate itself, without even going into the obvious bias of a chair who refers to defenders of Israel’s right to exist as his “enemy.”