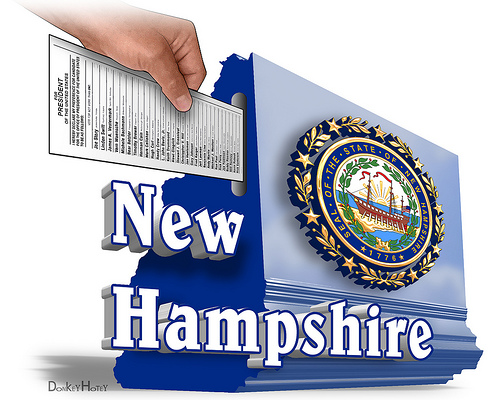 The New Hampshire primary is in the books. And the drama was over early as real estate mogul Donald Trump and Sen. Bernie Sanders cruised to easy — and poll-predicted — victories. The real fight emerged in the battle for second and third place among establishment Republicans desperate to grab a top-tier slot heading into the South Carolina primary. Below, the best and the worst of the night that was.

* Donald Trump: For all of the “I told you so”-ism after Trump’s not-so-good Iowa organization failed to make good on his polling lead going into that state’s caucuses, the real estate billionaire reasserted his grip on the Republican race with a convincing New Hampshire victory. Say what you will about Trump but he demonstrated real resilience in the face of a setback eight days ago in Iowa. Trump now has a second place in Iowa and a first place in New Hampshire — something very few people thought could happen even a few months ago. Trump will head into South Carolina in 10 days with real momentum and having proved that he can do more than just draw big crowds to gawk at him. He proved tonight he can win.

* Bernie Sanders: If I told you six months ago that a 74-year-old socialist would crush the former secretary of state in the first-in-the-nation primary, there is NO way you would have believed me. Despite the best spin of Hillary Clinton’s campaign, Sanders’s win wasn’t simply about the fact that he represents a neighboring state. Howard Dean represented a neighboring state and lost badly to John Kerry in 2004. This is a convincing win for Sanders that shows, for the second time in eight days, his appeal with young voters and the energy behind him. The race moves next to Nevada on Feb. 20, a caucus state where Sanders was already better positioned than most people give him credit for and where he will benefit from the positive coverage from his New Hampshire win. Then, as the race widens out nationally, there is only one real question for Sanders: Does what happened Tuesday night in New Hampshire make him more able to appeal to black and Hispanic voters? If not, he (still) can’t win.

* John Kasich: The Ohio governor put everything on the line in New Hampshire. The gamble worked as he managed to carve out a second place showing, ensuring that he will stay in the race through South Carolina and battle for the mantle of establishment choice within the party. Kasich’s lead adviser — John Weaver — proved yet again that he knows how to position a candidate to appeal to New Hampshire Republicans and independents. (Weaver was in John McCain’s inner circle when the Arizona senator stunned the political world in New Hampshire in 2000.) Kasich’s strength in New Hampshire could well be his undoing as the race moves south and westward; his crossover appeal as a non-partisan problem solver will play far less well in, say South Carolina than it did in the Granite State. But, that’s a worry for tomorrow for Kasich. At this point, he’s got to be happy that he even has a tomorrow to worry about in this race.

* Michael Bloomberg: The former New York City Mayor stoked the fires of a possible third party bid earlier this week by disparaging the “banal” nature of the current conversation in both parties. The wins in New Hampshire by Trump and Sanders open up the possibility that one or both men could wind up as their parties’s nominees, a dream scenario for those — most notably Bloomberg himself — who dream of a real chance for the former mayor. I wouldn’t fall down dead if later this week “a Bloomberg insider” leaked either polling numbers or some sort of internal memo designed to stoke the fires for the former mayor’s independent bid.

* Young people: For the second straight contested Democratic nomination fight, voters ages 18-29 are not a story in the race but the story in the race. Sanders’s massive totals among that age group in Iowa (84 percent) and New Hampshire (85 percent) are absolutely amazing. And Clinton’s inability to win even one in four votes of young people will be a giant story in the next few days and weeks. Millennials, you win again.

* Richard Witz: The 73-year-old retired janitor from Massachusetts had more votes, as of this writing, than Mike Huckabee, Rick Santorum and Jim Gilmore. Why? Maybe because Witz was sandwiched on the New Hampshire primary ballot between Jeb Bush and Donald Trump. It’s not clear whether Witz was in the state to enjoy his triumph; “I don’t know what’s going to happen with the snow,” he told a local Massachusetts paper on Monday. “I would like very much to go up, if I could find a place to park.”

* Hillary Clinton: Yes, she lost as we expected. But the margin Clinton lost by is eye-opening. By way of historical comparison, Clinton beat Barack Obama in New Hampshire by three points in 2008. John Kerry beat Howard Dean by 12 points in 2004. Al Gore beat Bill Bradley by four points in 2000. Sanders’s margin over Clinton is certain to be wider than any of those. Her problems among young voters is real and troubling for a party whose current president built his electoral coalition on his strengths among voters ages 18-29. (“I know I have some work to do — particularly with young people,” Clinton said Tuesday night after the race was called.) In her concession speech, Clinton did everything she could to insist there was no space between her and Sanders on issues like income inequality and campaign finance reform. It remains to be seen whether she will be more effective at selling that idea than she has been in Iowa and New Hampshire. Clinton’s greatest strength as a politician is and has always been her resilience and perseverance. She gave a nod to that in her concession speech by insisting the key is not how many times you get knocked down but how many times you get up again. That strength will be severely tested in the coming days as there will be calls for her to make staff changes and for a major overhauling of her message. Will she bend to the pressure? Should she?

*Chris Christie: The New Jersey governor peaked too soon. Six weeks ago, polls showed him cresting into double digits — and into the top three — in New Hampshire. But, unfortunately for Christie, the New Hampshire primary wasn’t six weeks ago. Christie’s biggest contribution to the race in New Hampshire may have been the body slam he delivered to Marco Rubio in last Saturday’s debate in the state. Christie pledged earlier Tuesday that his campaign would continue on in South Carolina regardless of what happened in the Granite State. It’s hard to see that happening now.

* Marco Rubio: Coming off the Florida senator’s surprisingly strong third place showing in Iowa, Rubio’s people whispered about the possibility of him finishing second in New Hampshire. He didn’t come close. While it remains to be seen whether he will finish fourth (ahead of Bush) or fifth (behind Bush), it seems nearly certain he won’t get into the top three. That’s a missed opportunity for Rubio to consolidate the establishment behind him going into South Carolina. He will now not only face a real fight for the establishment vote from Kasich (and maybe Bush) in South Carolina but will also have to weather questions over the next few days about whether his robotic responses in the final days of the New Hampshire primary were a sign of bigger problems with his candidacy.

* Maggie Hassan/Jeanne Shaheen: The sitting governor and the state’s Democratic senator were high-profile endorsers and surrogates for Clinton in New Hampshire. Didn’t matter. Like, at all. Which provides yet further evidence that endorsements are, almost always, meaningless in the context of a presidential primary process.

* Ben Carson and Carly Fiorina: So, I hate to be the one to break it to Ben and Carly, but, well, it’s all over.

* Bernie Sanders’s victory speech: Why was it so looooooong? Sanders simply read his stump speech. Yes, the assembled crowd went bananas. But, it felt like a missed opportunity for Sanders to reach out to the folks who are outside of Sanders’s ardent base of support. The moment felt like it required something more than Sanders delivered.