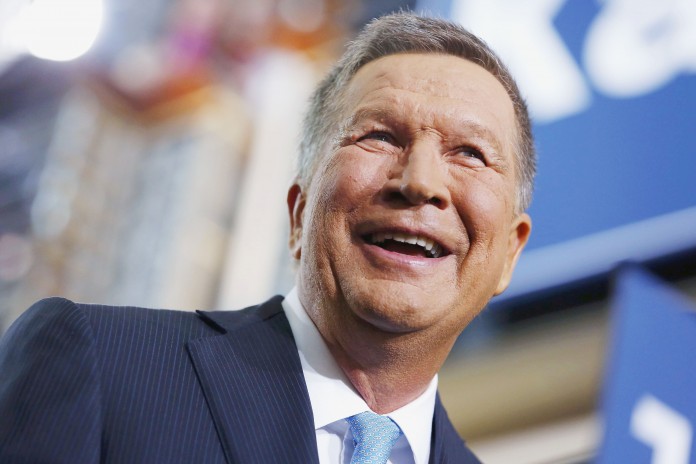 Ohio Gov. John Kasich– who ran as a sunny, moderate “Prince of Light and Hope,” but won only his home-state primary – will bow out of the Republican presidential race on Wednesday after yet another defeat in Indiana, according to senior campaign advisers.

The departure – to be announced by Kasich at 5 p.m. in Columbus – fully clears the field for front-runner Donald Trump as the Republican nominee. Another rival, Sen. Ted Cruz, R-Texas, dropped out of the race Tuesday night.

Kasich, 63, entered the race with an impressive resume: 18 years in the House, where he built a reputation as a budget-cutter; a stint as a Fox News host; and four years as the popular governor of a presidential swing state.

His policy positions leaned toward the middle: for one thing, Kasich had defied his own party and expanded Medicaid, the federal health-care program for the poor, in Ohio. “People have accused me of, at times, having too big a heart,” Kasich said in one GOP debate. That centrist appeal made Kasich seem like a formidable general-election candidate.

But he never got there.

The high point of Kasich’s campaign came on March 15, when Kasich won the Ohio primary. He was showered in confetti, and promised to return to Ohio this fall as the GOP nominee.

“I’m getting ready to rent a covered wagon,” he said then. “We’re going to have a big sail and have the wind blow us to the Rocky Mountains and over the mountains to California.”

That was an odd metaphor, but an apt one. After Ohio, Kasich did about as well as somebody trying to cross the Rockies in a sail-powered wagon.

Kasich made odd strategic choices. He campaigned in Utah, even though rival Cruz was expected to dominate there – and did. Kasich campaigned in New York, the home turf of rival Trump, and hurt his own cause when he seemed to explain Judaism to Jewish voters in Brooklyn.

The rest all went to Trump. The mogul soon applied one of his famous nicknames to Kasich: “1-for-38.”

In Indiana, Kasich first appeared to agree to a deal with Cruz, in which Kasich would withdraw and leave Cruz to face Trump alone. In turn, Kasich would not be challenged by Cruz in two later and less-important states, Oregon and New Mexico.

But Kasich appeared to undercut that deal quickly, by saying that his supporters in Indiana should not shift their votes. “I’ve never told them not to vote for me, they ought to vote for me,” Kasich said.

For weeks, it had been clear that Kasich would not reach the 1,237 delegates needed to clinch the GOP nomination. In fact, even as the race dwindled to three active candidates, Kasich was in fourth place – with fewer delegates than Sen. Marco Rubio (Fla.), who’d dropped out weeks prior.

Fundraising was also a problem: the Ohio governor raised less than $17 million in all by the end of March, forcing him to run a lean campaign. He began April with just $1.1 million in the bank. (Cruz, by comparison, raised nearly $80 million.)

Because of his meager fundraising, Kasich has leaned heavily on two super PACs, which together brought in more than $26 million and financed much of his television advertising.

Kasich’s last hope was that Trump would also be denied 1,237 delegates, and that he would be chosen in an open party convention. But even that backup dream began to fade, as Cruz got his own supporters elected as delegates.