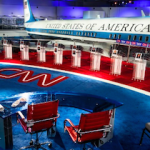 Conservative author Ann Coulter reacted to Wednesday night’s Republican presidential primary debate by suggesting that the candidates were spending too much time pandering to Jews.

“How many [expletive] Jews do these people think there are in the United States?” Coulter asked in an angry tweet.

In a follow-up message, she speculated that the candidates were trying “to suck up to the Evangelicals.”

“How to get applause from GOP donors: 1) Pledge to start a war 2) Talk about job creators 3) Denounce abortion 4) Cite Reagan 5) Cite Israel,” Coulter added, even after being criticized by Twitter users.

According to reports, Coulter has fallen out of favor with conservative media in recent months.

New York Magazine’s Annie Lowery recounted how Coulter was recently livid after CNN decided against using her on air and left her sitting in the green room instead.

Either way, her Tweets last night shocked Jews and others across the globe.