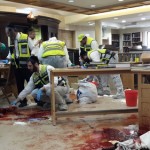 After every Palestinian terrorist attack, the news media report the names of those killed and the number of those wounded. The names of the injured are almost never mentioned. In many cases, they are maimed for life, but nobody outside their immediate families will ever know their names or remember what happened to them.

The one tragic exception to this Rule of the Forgotten Victims is if someone who is injured in an attack later dies from his wounds. And so the name of Rabbi Haim (Howie) Rothman briefly entered the consciousness of world Jewry this week, when he passed away from the devastating injuries he suffered in the November 2014 Har Nof synagogue massacre.

Rabbi Rothman left the comforts of Toronto in 1985, to make his home in Jerusalem, where he and his wife raised 10 children and became beloved members of the Har Nof community. On Nov. 18, 2014, the Palestinian terrorists Uday Abu Jamal and Ghassan Muhammad Abu Jamal burst into a Har Nof synagogue, swinging axes and firing automatic weapons.

Some of the worshippers may have known the Jamals. The two cousins worked in one of the neighborhood’s grocery stores. Some people probably see the fact that Palestinian Arabs take jobs in Jewish businesses as a sign of peaceful coexistence. Not in this case.

The Jamals murdered four rabbis (three of them American citizens) and an Israeli policemen. They also wounded seven others. Rabbi Rothman was one of those seven anonymous “others.” He lingered in a deep coma for 11 months.

A fitting way to honor Rabbi Rothman and the other Har Nof victims would be to take some concrete action against those who sponsored the attack. In Gaza, Hani Thawabta, one of the leaders of the Popular Front for the Liberation of Palestine (PFLP), announced that his group claimed “full responsibility for the execution of this heroic operation.” Another PFLP leader, Jamil Mizher, told reporters, “We bless the operation and the two young men who carried it out, but we have not received any confirmation that it was planned by the PFLP, even though it was consistent with the history of the PFLP.” Yet another PFLP official referred to the Udays as “PFLP comrades.”

The PFLP is the second-largest faction of the Palestine Liberation Organization (PLO). Mahmoud Abbas, president of the Palestinian Authority, is also chairman of the PLO. The PFLP has never been expelled from the PLO, despite the fact that it continues to carry out periodic terrorist attacks against Israel. On June 29, 2015, for example, the PFLP claimed responsibility for a drive-by attack on Israeli motorists near the community of Shvut Rachel. One of the Israelis was killed, four others were wounded.

The Obama administration should demand that Abbas expel the PFLP from the PLO. If he refuses, he should be declared partially responsible for the Har Nof attack, and he should be put on the “U.S. Watch List,” which prohibits terrorists from entering America.

The Palestinian Authority has a policy of paying salaries to the families of Palestinian terrorists who are killed in action. Meaning that the families of the Jamals, the Har Nof killers, are now being subsidized by the PA. And since the U.S. gives the PA $500 million annually, it means that the killers’ families are in effect being paid by American taxpayers. The U.S. should deduct those amounts from the PA’s aid package, and send it to the families of Rabbi Rothman and the other victims.

American Jewish organizations need to press for steps such as these as quickly as possible—before Chaim Rothman’s name, like so many others before him, is forgotten.

Stephen M. Flatow, an attorney in New Jersey, is the father of Alisa Flatow, who was murdered in a Palestinian terrorist attack in 1995. He writes this from a tense Yerushalayim.