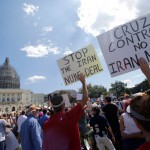 A long-awaited congressional effort to reject the Iran nuclear agreement now appears in jeopardy, after a revolt by Republicans in the House of Representatives, Tim Mak reports for the Daily Beast.

If Congress is unable to pass a unified resolution rejecting the Iran deal, the outcome is a win for the Obama administration, which negotiated the agreement and would have to veto the measure of disapproval.

The House was set to begin procedural work on the vote of disapproval Wednesday, but conservatives with the GOP’s ranks protested that the Obama administration had not yet produced “side deals” reached between Iran and the International Atomic Energy Agency, Mak reports for the Daily Beast.

Meanwhile in the Senate, Democrats supportive of the Iran deal appear to have the votes to block formal debate on the issue.

“The Senate appears stuck and House GOP members are fired up about the secret IAEA side deals. They don’t think Obama has complied with [a bill requiring the administration present all documents related to the Iran deal]. Given all of that, we are likely going to take a new approach,” a House leadership aide told The Daily Beast. “House leadership wanted to move forward with a vote of disapproval but leadership got feedback from many members that they believed the president did not comply with the law.”

“The Senate situation is especially motivating for this. [Senate Democratic Leader Harry Reid] apparently has the votes to prevent a debate in the Senate… so a new approach was needed,” the aide explained. In order to overcome procedural hurdles in the Senate, 60 senators must vote to advance debate, and it is in doubt whether opponents of the Iran deal have the numbers.