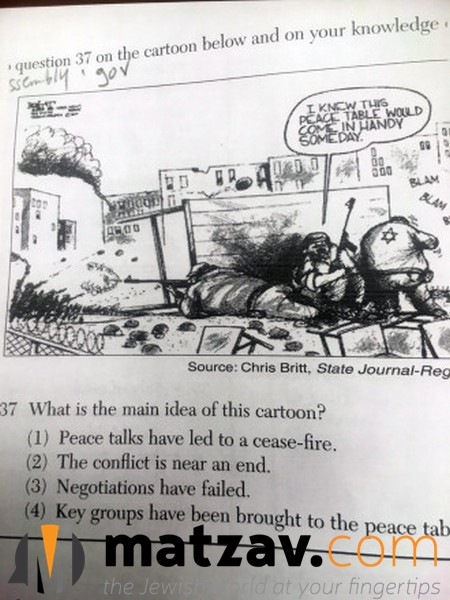 The NY Post reports: A political cartoon riffing on the Mideast conflict appeared last week on a global-studies Regents exam — sparking cries of ­“anti-Israel propaganda” from some lawmakers, teachers and students.

The cartoon depicts three fat, armed Israeli soldiers using an overturned table as a shield, with one saying, “I knew this peace table would come in handy someday.”

It was used in the test administered on Jan. 24, and asked students, “What is the main idea of this cartoon?”

Assemblyman Dov Hikind says the cartoon’s inclusion by the Board of Regents is a jab at Israel, because it portrays the soldiers — one with a Star of David on his back — as aggressive and oafish.

“I consider this anti-Israel propaganda. It is so demeaning,” the Brooklyn pol told The Post.

“There’s nothing to learn from this. It’s only to undermine Israel, and I can tell you that the people who came to me — a teacher who saw this and was so furious, so upset that this was on the Regents. Why would you use this? What is the purpose of this? It makes me very angry that people responsible made this decision.”

Some students pushed back on test day, including a Forest Hills HS 10th-grader who told a teacher he felt targeted, according to a classmate.

“The entire class said it was offensive, but the teachers told us it was a random question [the exam creators] found online and put it in the test,” said the student who declined to give his name. “A Jewish kid then told the teacher he felt insulted. He said he felt like they were putting the blame on his religion.”

State Education Department spokesman Jonathan Burman defended the question, saying it “measures the students’ ability to analyze a political cartoon, understand the cartoonist’s point of view and apply that information to the questions being asked.”

“Political cartoons contained on Regents exams are sometimes very pointed, but they are never intended to represent the point of view of the Board of Regents or the Education Department on a given issue,” Burman said.

Regents questions are created by teachers and tested on a sample of students before they are used, a state education source said.

The cartoonist, Chris Britt, who originally produced the drawing for an Illinois newspaper, did not think the Mideast cartoon was biased or inappropriate for a test.

“To me it was just showing how frustrating the peace process was,” he said. “It’s not trying to indoctrinate someone. It’s, ‘Can you look at this and tell us what’s going on in the creator’s mind?’ ”

The political cartoon, which was part of last Tuesday’s examination, illustrated three soldiers in the midst of fire hiding behind a table with the caption reading, “I knew this peace table would come in handy someday,” with one of the soldiers identified with a Star of David on their back.

“Who is responsible for allowing this incredibly biased, anti-Israel propaganda be part of a Global Studies Regents exam,” Hikind said. “I want to know who at the Board of Regents thought it was appropriate to incorporate such prejudice into their examination. This is beyond comprehension and is the epitome of disrespect to those who care deeply about Israel’s survival.”

Added Hikind: “I call on the Board of Regents to apologize for their insensitivity and irresponsible decision to include such material in their curriculum. We send a very dangerous message when we elect to use propaganda like this in our examinations. What exactly are we testing our students on when we present them with biased cartoons? Rather than educating our children on issues in the Middle East, we’re presenting them with horrible, slanted images that will only jade their point of view moving forward.”