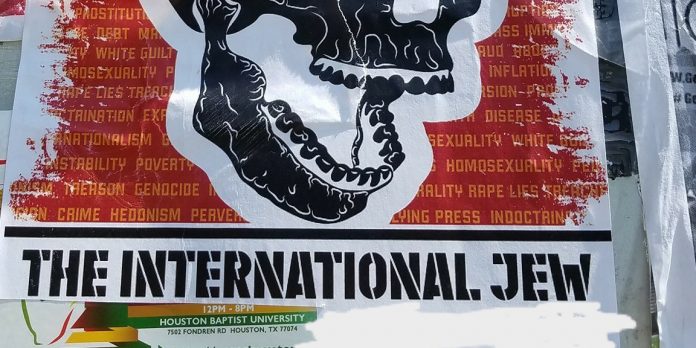 Dozens of flyers and stickers promoting neo-Nazi propaganda were found at the University of Houston (UH) this week, the latest incident associated with an increase in white supremacist activity on campuses nationwide.

The flyers, found on bulletin boards, walls, trash bins, and lamp posts at the university’s main campus on Tuesday, included phrases such as, “Beware the International Jew” and “Imagine a Muslim-Free America,” according to a statement shared online by UH’s chapter of the Young Communist League (YCL).

The phrases are associated with the extremist group Vanguard America, which “has engaged in unprecedented outreach efforts to attract students on American college campuses,” according to the Anti-Defamation League (ADL). During the 2016-17 school year, the civil rights group said it “counted at least 32 incidents where VA fliers were posted on campus in Arkansas, California, Florida, Indiana, Maryland, New Jersey, Oregon, Texas, Virginia and Washington.”

Michael Leone, chair of the YCL at UH, said he took down about 30 of the posters before reporting the incident to campus security. In a statement posted to social media on Thursday, his group called on UH chancellor Renu Khator to “voice condemnation of fascism, white nationalism, and any attempts by adherents of these ideologies to intimidate and threaten students at the University of Houston.”

UH spokesperson Mike Rosen told The Algemeiner that the content of the flyers “is reprehensible, but we respect the constitutional right to freedom of expression.”

“Many of the signs were removed not based on content but because they were posted in locations where they are prohibited by the university and may constitute criminal mischief,” he added. “The UH police department has an open case addressing the postings. If those responsible are identified it’s possible we will pursue a criminal remedy.”

UH Chief of Police Ceaser Moore Jr. told the student newspaper that his officers “are working to address the inappropriate and possible criminal postings around campus.”

The ADL warned earlier this week that the white supremacist group Identity Evropa, which helped organize racist protests at the University of Virginia in Charlottesville in August, has embarked on a recruitment campaign to attract college students as they begin their fall term.

The student newspaper at the University of Mary Washington in Virginia reported on Thursday that a drawing of a swastika was found on campus late last month.

Since September 2016, the ADL has recorded 188 incidents of leafleting or other activities by white supremacist organizations on 129 campuses in 36 states.