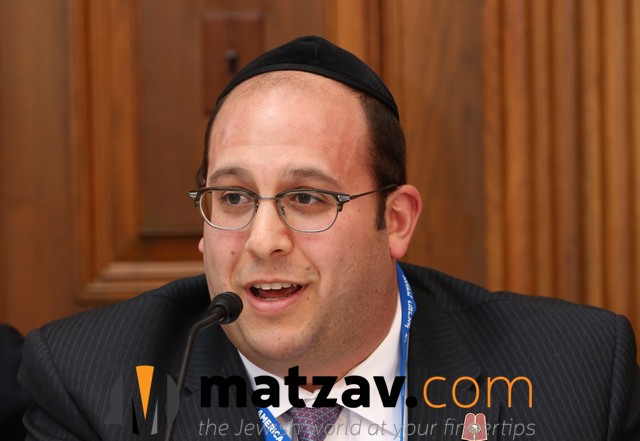 So read the headline over a March 24 Asbury Park Press editorial.  The “close look,” the editorial explains, is merited by “the encroachment of the Orthodox community” on neighboring areas, “school funding shortfalls,” school busing cutbacks, “building code issues,” flouting of zoning and construction rules, the number of tax-exempt properties in the township and activities of real estate brokers that “smack of classic blockbusting.”

Readers are warned about the dire situation, which “gets grimmer by the day,” and about that earlier-mentioned “encroachment,” how the Jewish community is… headed… their… way.

I think it’s time for a look in the mirror  – for the APP itself.  It is time for the media to apply its lens of daylight and objective truth to itself – to examine the way it portrays Lakewood’s Orthodox as some “insular” religious monster.

Yes, there are school and busing funding shortfalls in Lakewood.  But the Board of Education, the presumed villain “controlled by the Orthodox,” can only work with the funds available to it, and we all know that the State severely shortchanges Lakewood, as it does other districts.  The State knows this too well, as it is directly responsible for the districts, via its State monitors.  The Toms River school district has a $7.4 million deficit; Freehold schools are underfunded by $7.1 million; Red Bank’s schools a $9.6 million in the red. And Patterson needed a $120 million bailout and Camden even more; why is Lakewood’s $8.5 million deficit alone more worthy of the APP’s call to authorities to investigate Lakewood?  And why the call to investigate an entire community of 65,000 people? Is this call not the height of racial profiling and bias?

Building, zoning and construction laws exist for good reason, and must be respected- something demanded by Lakewood’s citizens, just as they are demanded by Toms River citizens.  The APP knows that it was precisely Lakewood Orthodox merchants who fought zoning violations in Downtown Lakewood. The APP, victim to its own fearmongering, is demeaning and denigrating an entire community of good people – as all law breakers, tarring an entire community with an anti-Semitic brush.

As to the claimed “blockbusting,” by us “invaders” that ugly term that refers to the practice of intimidating homeowners into selling their homes. No one has the right to badger or pressure a homeowner to sell a property.  But there are many homeowners in Toms River or Jackson who can testify to the professionalism of those who brokered the sale of their homes to Orthodox Jews.  And at, or well above, their established market value.  The law of supply and demand is alive and well in the area, and so the desire of some Orthodox Jews to live in the area has only increased property values, in some cases considerably so. Typecasting the Jewish community for a few hundred who move into a township as a huge bloc of blockbusters is falsely tarring an entire community.  In doing so the APP is creating fear and hatred that far outweighs and alleged misconduct. The APP is not engaged in blockbusting, it is engaged in community busting and religious bashing.

As to the number of tax-exempt properties in Lakewood, the facts belie that – Lakewood does not have a high number of tax exempt properties per capita, and it has ADDED over 4 billion dollars in new construction to the tax paying rolls – with new taxable properties. Lakewood is rehabilitated and gentrified and values have gone up – not down – and the towns ratable base has swelled.  Why doesn’t the APP recognize all these new taxable properties created by Orthodox families and businesses, and only point to the handful of properly exempt properties? In Lakewood, houses of worship and schools abound, as they should. This is good, not bad, it creates a fabric for a community that is good, not bad.  It drives economic vitality, family, community, volunteerism and all the good things that America is made of. Surely, the APP doesn’t mean to assert that Jewish religious institutions should be less accommodated than non-Jewish ones, does it? Why did the APP never attack the college in Lakewood that is not Orthodox affiliated and which has over 150 acres of exempt land, much of it unused? Why did not attack the huge lands owned by the airport, which is tax exempt and serves no public purpose, except to satisfy a few flight enthusiasts, and is not Orthodox affiliated? Why did the APP never bother to attack the Blue Claws Stadium, which is not Orthodox affiliated and which pays no property taxes- and which receives a huge public subsidy, with no benefit to the citizens of Lakewood?

Why does the editor gloss over the statistics showing the economic engine that has been created in Lakewood?  Why ignore the over ten thousand new jobs created by the dozens of businesses that have been created in Lakewood? Why be silent about the countless volunteer organizations and their volunteers, who number over a thousand?  Why skip over the volunteer firefighters, first aiders, social service and health volunteers, who serve all of Ocean County- and who are Orthodox?  The latest class of firefighters to graduate Ocean County Fire Academy has more than half who are from the Orthodox community –and they serve all. Toms River, Howell, Jackson and Brick First Aid are filled with volunteers who live in Lakewood and care about all– not just about their alleged “insular,” in the words of the APP, selves.

The APP Board dismisses any suspicions that anti-Semitism has anything to do with efforts to prevent visibly Jewish Jews from seeking to live in areas neighboring Lakewood.  “It is,” the paper editorializes, “nothing of the kind.”

Perhaps the APP knows why five thousand – you read that right – five thousand Toms River residents signed a petition to keep a Chabad shul, which serves a few dozen Jews out of Toms River, on a block that has a church, a Reform and Conservative Temple but no Orthodox one yet.  The APP knows well of the Jackson residents who post social media pictures of themselves dressed like Hitler, or sentiments like “I really wanna drive around Lakewood and run over every Jew with my car,” when the words “Burn the Jews” are scratched in the parks of Toms River, and when swastikas are found spray painted on Jewish-owned stores in Lakewood. It knows of its own role in unbalanced and misleading “reportage” and editorializing about Lakewood –it knows well how it is stoking such vileness. In its warped view it believes that this is right – because in its view Toms River and Jackson must remain Juden-rein!

I don’t know if APP, in portraying Lakewood’s Orthodox Jewish community as outlaws and an “encroaching” threat, of being motivated by anti-Semitism, or if they simply bought into their own biased narrative about very Jewish Jews

We as a community cannot sit silently while we are being slandered, smeared and defamed.

We need you to speak up and tell Hollis Towns, chief Editor of APP, that his editorials and published letters are fueling the flames of hatred in Ocean County. All of us have been tainted, all of us need to tell Mr. Towns, [email protected], that this incitement must stop.

Below is a direct excerpt from a letter printed last week in the APP. It should make your blood boil –not just on the anti-Semite writer, but on the APP which published it – when they would never publish such on any other group or religion.

The March 23 editorial, “A.G. needs to take close look at Lakewood” concerning the expansion of Orthodox Jews into surrounding towns stated, among other things, that the financing of home purchases should be investigated. That is something I’ve always wondered about.  …  When new neighborhoods are approached by the Orthodox, home purchase offers are often above the current market value and the payment is in cash. What family … has an extra $500,000 in cash lying around?  These are the same families sending their large families to private schools. Are they paying tuition also? ….  If you drive through Lakewood, you would think that Honda was giving away Odyssey vans. Where did the cash come from to purchase these new vehicles? Follow the money: It could provide an interesting explanation for what is going on in Lakewood.