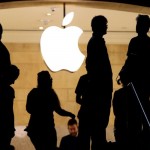 Before the hack, only five malicious apps had ever been found in the App Store, Reuters reports.

The hackers used the malicious code in these apps by convincing developers to use a counterfeit version of Apple’s software for creating iOS and Mac apps, known as Xcode, the company said.

Apple spokeswoman Christine Monaghan said the compay was working with developers to ensure they’re using the proper version of Xcode, but did not say what steps iPhone and iPad users could take to find out if their devices had been compromised. Read more.