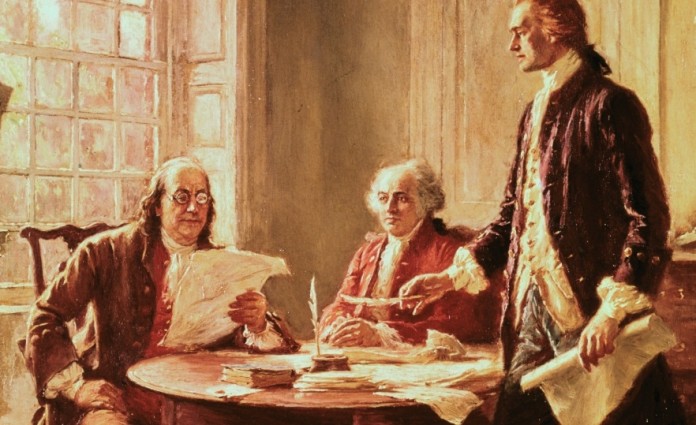 The feud between Apple and the Justice Department took another turn Tuesday, as the technology giant used a new court filing to say that the Founding Fathers “would be appalled” with the government’s stance.

Apple argued that if the government prevails, it could force companies to do a number of other things going forward in the name of surveillance and security, such as seeking software that would use phones to track movements or listen to conversations. Apple added in a particularly acidic footnote: “The government is adept at devising new surveillance techniques.”

While the government has argued this case is about one locked iPhone belonging to one of the attackers who killed 14 people in San Bernardino, California, in December, Apple says this argument can only be resolved in the context of the larger debate playing out nationwide over encryption and security.

“This case arises in a difficult context after a terrible tragedy,” Apple wrote. “But it is in just such highly-charged and emotional cases that the courts must zealously guard civil liberties and the rule of law and reject government overreaching.”

The Justice Department sought and received a judge’s order last month under the All Writs Act of 1789 that would have forced Apple to help them access the contents of the locked phone, but Apple has fought the order.

Under this order, Apple was told to write software that would disable a feature deleting the phone’s data after 10 incorrect password attempts. The FBI says this help is limited to this case, but Apple argues that the government is effectively seeking a backdoor that would weaken security. In its latest filing, Apple also argues that the 1789 law cannot be used this way.

“The government attempts to rewrite history by portraying the Act as an all-powerful magic wand rather than the limited procedural tool it is,” Apple wrote in a brief filed Tuesday in the U.S. District Court for the Central District of California’s Eastern Division.

The company added: “Forcing Apple to create new software that degrades its security features is unprecedented and unlike any burden ever imposed under the All Writs Act.”

The Justice Department did not immediately respond to a request for comment Tuesday.

As the argument has played out publicly, it has become increasingly acrimonious, with both sides using court documents and public appearances to snipe at each other. The Justice Department has said that Apple is only looking out for its marketing, while the tech company says the FBI is seeking a “dangerous power.”

Last week, the Justice Department had said attempts by Apple and other Silicon Valley giants to link the fight to the broader debate over encryption were a “diversion,” arguing in a court filing that the fight was one of Apple’s own making.

Apple’s general counsel responded to the brief by saying it “reads like an indictment” and was filled with “false accusations and innuendo.”

In recent weeks, Apple has been joined by numerous other major tech firms – a list that includes Google, Facebook, Twitter, Amazon and Microsoft – arguing this case could set a dangerous precedent and endanger the privacy of countless people relying on encrypted devices. Law enforcement groups and some relatives of victims of the San Bernardino attack have sided with the FBI, saying the phone could contain information on possible accomplices or other terrorists.

President Barack Obama said last week that while he would not comment on this case, he said the government must be able to maintain its access to encrypted information, saying that seeking “strong encryption, no matter what. … does not strike the kind of balance” he believes is needed.

The case is set to head to a courtroom next week in California for oral arguments, but experts say it could continue to be fought all the way to the U.S. Supreme Court.