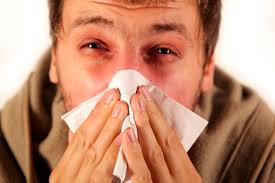 When her daughter was in preschool, Michelle Simon would walk down the hall assuring other parents that the curly-haired child was not contagious despite her red, puffy eyes. This week, when the now 6-year-old looked up at her through swollen slits, Simon kept the child home from school and called for a next-day appointment at the same place many in the region are desperately turning to for help this month: the allergist.

If florists can count on Valentine’s Day for business, and shop owners on Christmas Eve customers, allergists have April. And this April appears especially busy.

“I’m like an accountant,” said Rachel Schreiber, an allergist who has a practice in Rockville, Maryland. “When April 15 comes, that’s it. I’m not going anywhere.”

Schreiber sat across from Simon and her daughter, Dylan Neustadt, on Tuesday in an examining room with ice cream cones painted on the wall. Dylan looked down at pink socks with the words “Taco Tuesday” and listened as Schreiber ticked off the types of pollen the girl is allergic to: tree, grass, weed. She and Simon then discussed the medications Dylan uses daily to manage her symptoms. Four total, including Zyrtec and Allegra.

“Every year, she struggles,” said Simon, who lives in Rockville. “This time of year we play inside. We play in a bubble.”

Misery can be measured in many ways — waiting rooms or pollen tallies — but by all accounts the allergy-afflicted in the Washington area are hurting badly this spring.

In an annual report by the Landover, Maryland-based Asthma and Allergy Foundation of America that ranks the 100 most challenging places in the United States for spring allergies — based on pollen counts, money spent on medication and the number of board-certified allergists — Washington came in at 84. (Richmond was 14th on the list.) On Tuesday, a ranking of the latest pollen hot spots on Weather.com listed Washington as seventh and Baltimore as third.

Then there is the microscopic view of discomfort. On the rooftop of a 2 1 / 2 -story building in Silver Spring, a spinning box collects pollen that microbiologists will measure down to grains per cubic meter.

Susan Kosisky, the chief microbiologist in charge of that task for the U.S. Army Centralized Allergen Extract Laboratory, said the area produces samples from more than 20 types of trees and about 15 kinds of weeds.

“We’ve got something for everybody here,” Kosisky said. “They say if you come to the Washington, D.C., region without an allergy, there is a chance you will leave with one.”

Maryland allergist Jacqueline Eghrari-Sabet said it takes about three years to develop allergies in a new place, and that every year she sees patients who say, “How is this happening to me? I’ve never had this.”

Trying to gauge whether one allergy season is worse than another is difficult because suffering often comes down to individual factors, she said. Many of the patients she is seeing in her Gaithersburg office have been exposed to winter allergens such as mold or dust mites and are now being hit by springtime ones.

“Is this one of those blockbuster catchphrase pollen seasons?” Eghrari-Sabet said, referring to years past when terms such as “pollen vortex” and “pollen tsunami” were coined. “We haven’t come up with one for this one. But there are plenty of people who are individually hosting their own misery party. That’s what matters.”

Just as a florist hires extra help for Valentine’s Day, she said, she has made preparations to handle the influx of patients. Her office has extended its hours, and the staff aims to handle patients with allergies to food and other non-seasonal sensitivities at different times of the year.

In Schreiber’s office, the doctor stepped into the hallway just after 10:30 a.m. and declared, “It’s a madhouse.” Every exam room was full, and in the waiting room, three women sat, listening for their names to be called. They compared symptoms and joked about how only on television, where everyone is slim and has flawless skin, do allergy medications work.

In one of the exam rooms, a 2-year-old suffered from hives, but his father was the one sitting on the table answering Schreiber’s questions. His allergies hit him two or three years after he moved to the area from Hong Kong, and now his nose bleeds. Schreiber explained that allergies can cause tissues in the nose to swell, and stretched blood vessels break more easily.

From there, the day would only get busier. Starting at 2 p.m., the after-school crowd would start showing up and the phones would not stop ringing. All the while, Schreiber would make her way from one exam room to another, knowing something her patients might not want to hear.

The good news, she said, is that tree pollen season typically improves in May.

The bad: Next come grass and weed pollen.