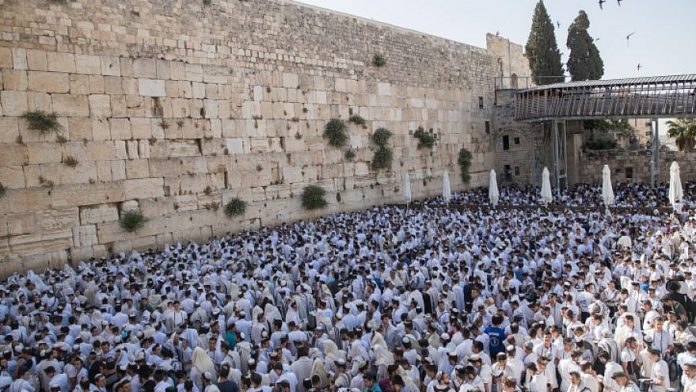 As Jews celebrated the liberation of Yerushalayim and the reunification of the city in the 1967 Six-Day War, Arabs outraged that Jews had been given limited access to the Har Habayis for the occasion hurled chairs, stones and other objects at security forces, according to the Israel Police Spokesperson’s Unit on Sunday.

Security staff responded with riot dispersal maneuvers, and hundreds of Jews were permitted to continue to walk through the holy site in groups.

The Har Habayis is typically restricted to Jews during Ramadan, out of concern for the sensitivities of Muslim worshippers.

However, an exception was made for Yom Yerushalayim, which fell during Ramadan this year. Yom Yerushalayim marks the 52nd anniversary of the liberation of the Har Habayist, Western Wall and eastern side of the city, as well as the historic Yehuda and Shomron regions to the south and north of the capital.

This was first time in 31 years that non-Muslims were allowed on the Har Habayis during the last days of Ramadan.

Initially police had said the holy site would be closed to non-Muslims, but the decision was subsequently retracted.

Israel entered into an agreement with the Jordanian-based Islamic Waqf after the Six-Day War in which the Jewish state would maintain security control of the site, while the Waqf would retain religious control. The Islamic body subsequently forbade Jews from engaging in any kind of prayer, including moving their lips, bowing, or prostrating themselves. Jews who perform any of these forbidden acts are typically removed from the Har Habayis by force.

“We have seen the police are doing their best to enable Jews from all over to ascend to the Temple Mount and to safely enjoy the Old City and take part in the celebrations,” said Jerusalem Old City resident and tour guide Meir Eisenman. “Over the last two days, we’ve seen tens of thousands of Jews coming to celebrate Jerusalem—maybe more. We’re looking forward to even hundreds of thousands coming in for the celebrations and for dancing at the [Western Wall] plaza.”

Nearly all poskim agree that there are severe halachic issues with ascending Har Habayis.