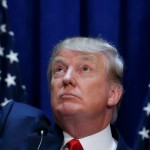 Many say the populist crazy talk is typical of the White House primaries, but Republican frontrunner Donald Trump’s increasingly incendiary remarks are leading some conservatives to brand him a “fascist” and party rivals to ramp up attacks against him.

The real estate tycoon recently said he would support registering Muslims in a database, and insisted — despite lacking any evidence — he saw Arabs in New Jersey cheer when the Twin Towers fell on 9/11.

His stance has become so belligerent that voices are asking, even inside his party, whether he is committed to democratic values.
Republican experts are warning that Trump could do lasting damage to the GOP, and that his nomination in the party primaries would essentially hand the presidency to Democratic frontrunner Hillary Clinton.

Several campaign teams in the primary race now appear to be coalescing around the need to oppose the celebrity billionaire’s candidacy.

Establishment conservatives even took the unfathomable step of using the F-word against a member of their own party.

“Trump is a fascist. And that’s not a term I use loosely or often. But he’s earned it,” Max Boot, a military historian and foreign policy advisor to Republican presidential hopeful Marco Rubio, posted on Twitter.

In its Tuesday editorial the New York Times said the past week of the campaign had been “dominated by Donald Trump’s racist lies.”

“Trump’s campaign message reflects a kind of creeping fascism,” the paper said. “It needs to be rejected.”

Some campaigns have seemed reluctant to directly take on the Trump machine.

But Bush, struggling to gain traction in the race, piled on, telling Fox News Wednesday that Trump has been creating “an alternative universe” with his harsh rhetoric, particularly about Muslims.

“He doesn’t know what he’s talking about,” Bush said of Trump’s assertion that thousands of people were cheering on 9/11.

Many Republicans like New Jersey Governor Chris Christie have argued that the climate sparked by the Paris attacks would lead voters towards experienced politicians — not an untested commander in chief such as Trump.
But Trump’s campaign has shown extraordinary resilience, and “the Donald” remains atop all major new polls despite fact-checkers debunking many of his statements.

“They say that Trump can do almost anything, and nobody leaves me. And it is true,” Trump said at a rally Tuesday in South Carolina.

Republican groups are reportedly preparing attack ads against him including a political committee associated with conservative economic group Club for Growth.

It aims to solicit funds from anonymous donors to help “defeat and destroy” Trump, according to a recent Wall Street Journal report.

The ad shows US Air Force colonel Tom Moe, a former prisoner of war in Vietnam, paraphrasing the words of German pastor Martin Niemoller who spoke out against the Nazi regime.

“You might not care if Donald Trump says Muslims must register with their government because you’re not one,” Moe says in the clip.

“And you might not care if Donald Trump says he’s going to round up all the Hispanic immigrants, because you’re not one,” he adds.

“But think about this: if he keeps going, and he actually becomes president, he might just get around to you. And you better hope that there’s someone left to help you.”

Leave a Reply to Not Surprised Cancel reply