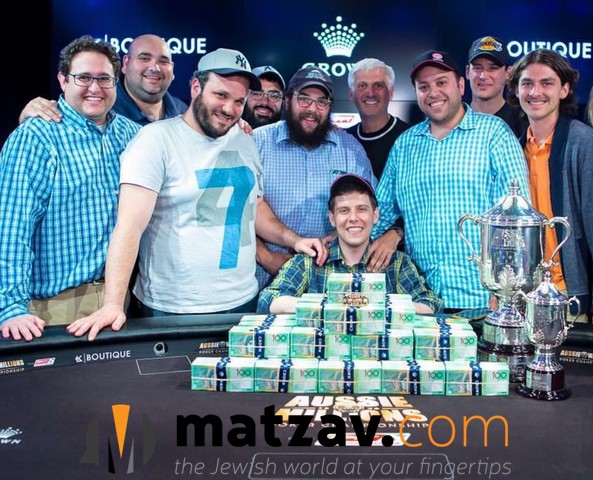 It was an unbelievable way to end an epic event, with Ari Engel becoming the 2016 Aussie Millions Main Event champion inside Crown Poker Room on Sunday.

Engel’s AU$1.6 million victory came at the end of a hard-fought heads-up battle when Tony Dunst attempted to make a tough hero call to double up. Unfortunately for Dunst, his fourth pair was no good against Engel’s top pair and he had to settle for a second-place finish worth AU$1 million.

For Engel, the win marked the most remarkable one of his career, but he’s certainly no stranger to success. A Canadian who regularly travels the poker tournament circuit across the globe, he spent eight early years of his life living in Melbourne. His travels returned him to the city for the 2016 Aussie Millions and it’s all come full circle thanks to this impressive victory. Engel, who can now add the bracelet to his trophy case, was smiling from ear to ear after the huge payday he earned.

At the start of Sunday’s final table, seven players remained from a starting field of 732 — the fourth-largest Aussie Millions Main Event in its 19-year history. First to go was Australia’s own John Apostolidis, and he was followed out the door by one of two female players to reach the final table, Kitty Kuo. Apostolidis took home AU$210,000, and Kuo scored AU$270,000.

The next two places on the payout sheet were filled in by two more Australians. First it was Dylan Honeyman falling in fifth place for $340,000, and then Alexander Lynskey took fourth for AU$445,000. For Lynskey, the run to the final table was extra sweet after he suffered a heartbreaking result in last year’s Aussie Millions Main Event. He took a severe beat late in the event and ended in ninth place after promise showed he was ripe for the final table.

Along with the aforementioned Kuo, Samantha Abernathy was the other woman at the final table, and she advanced into the tournament’s last trio of players. While she held her own throughout the day, the big stacks of Engel and Dunst proved too much to overcome. In the end, she moved all in with ten-eight and lost to Engel’s ace-nine.

Dunst entered the heads-up duel with the lead, and what a duel it was. The first five eliminations of the final table took 92 hands of play, but heads-up play took 123. Over the course of a few hours, Dunst and Engel traded blow after blow, but it was Engel’s punches that were landing with a bit more power as he ground his opponent down. Then, on the 203rd hand of the day, Dunst doubled back to just about even before the two headed into a 45-minute dinner break.

When the couple returned to action, it didn’t take long for Engel to go right back on the offensive in a big way. He made an impressive call with fourth pair to pick off Dunst’s five-high bluff, and this proved an interesting hand as it was then Dunst who eventually called off his stack incorrectly with four pair to lose out.

For Dunst, a cool seven-figure payday will help him wake up with a smile in the morning, but Sunday was on Engel.

“Thanks so much,” Engel said with a smile upon receiving congratulations after his win. “It feels awesome!”