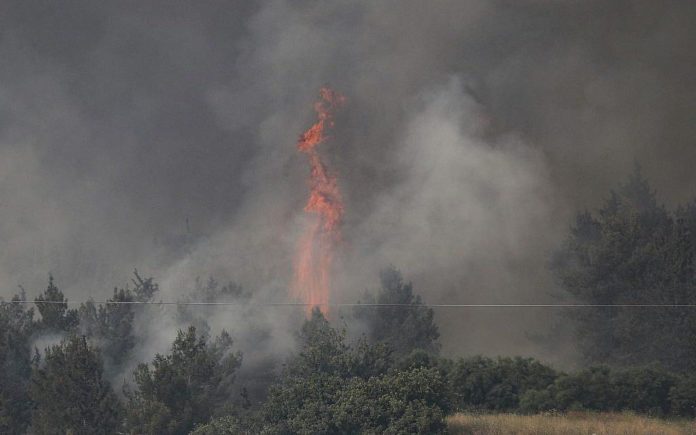 Investigations into the fire which destroyed the Mevo Modi’im community last week have determined that the evidence points to arson, as fire bombs start a blaze outside another Yerushalayim neighborhood.

Israel’s National Fire and Rescue Authority initially suspected faulty electrical wiring as the cause of the Mevo Modi’im blaze, and some speculated that customary Lag B’Omer bonfires were likely to blame for the massive conflagration which burned 40 of the town’s 50 houses to the ground, and damaged five more.

An unknown number of the 1,023 wildfires which raged across Israel on May 23 through May 25 are believed to have been set intentionally, by individuals who took advantage of the scorching heat wave and the pretext of Lag B’Omer fires to wreak destruction across the country.

On Sunday evening, fires broke out in a wooded area between the Jerusalem neighborhood of Pisgat Ze’ev and the Shuafat encampment, with Hebrew media reporting that the blaze was caused by fire bombs.

Israel’s Kan news reported that an additional fire bomb was thrown at firefighters as they attempted to extinguish that fire.

The firefighters were able to successfully put out the flames before they caused injuries or damage to property.