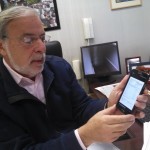 Assemblyman Dov Hikind (D-Brooklyn) will travel to Israel tomorrow, Wednesday, October 14 with a group of New Yorkers as part of a four-day solidarity trip. Hikind and the group will walk the streets of Yerushalayim, pay their respects to families of terror victims and survivors of terror attacks, and visit thousands of New Yorkers who are studying in schools in Israel. The visit is intended to demonstrate support for Israelis in light of a wave of deadly terrorist attacks.

“I am horrified and sickened by the barbaric and vicious terrorist attacks in Israel over the past few weeks,” Hikind said. “By being physically present and walking the streets of Jerusalem, my message is to give strength and support for fellow Jews and the people of Israel during this difficult time. There are currently thousands of Americans studying in schools all over Jerusalem and their parents are concerned. The people of Israel should know that the Jewish community, as well as the majority of the American public, stands in solidarity with them.”

Hikind added, “What is happening in Israel is intolerable and just pure evil. Everyone deserves the right to live free from terrorism. Prime Minister Netanyahu must do whatever is necessary to protect Israelis and put an end to these attacks.”