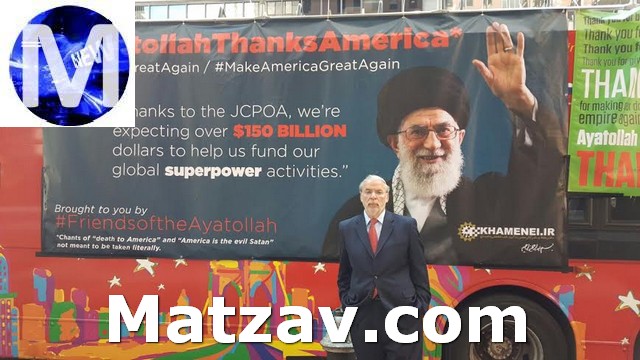 In an effort to showcase the absurdity of the Iran deal, Assemblyman Dov Hikind (D-NY) promoted the #AyatollahThanksAmerica ad campaign by riding on a parody tour bus.

Hikind made stops at the offices of Senator Kirsten Gillibrand and Representative Jerrold Nadler as part of satire tour “thanking” members of Congress and the American people.

The aim of the parody campaign is to highlight the dangers of the Iran deal and to urge members of Congress in favor of the deal to take a second look and reconsider their support. The bus featured posters of Iran’s Supreme Leader Ayatollah Khomenei with messages thanking members of Congress for their support of the Iran deal with the tagline “brought to you by #FriendsoftheAyatollah.”

“Today we stood outside of Gillibrand’s and Nadler’s offices to make our voices heard and urge them to reconsider their support of the Iran deal. Our community is massively disappointed in their decision. With the recent AP report of one of the side deals reached between Iran and the UN’s International Atomic Energy Agency, the latest news reads like a headline from the Onion. So we decided that satire is the best way to demonstrate this point. One only needs to listen to the chants of ‘Death to America’ and read the fine print from this deal to realize we are headed down a perilous path. Americans overwhelmingly think Congress should reject the deal. And indeed, with each passing day, it becomes clearer that the Iran deal is disastrous for the United States and our allies. Many members of Congress have eloquently put forward reasons why this deal must be rejected. It’s time for Democrats in Congress in favor of this deal, including our very own Senator Gillibrand and Rep. Nadler, to reconsider their support. We are determined to have them take a second look. The fight has to continue. It’s not over until it’s over.”