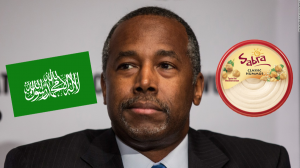 Donald Trump was heckled for refusing to recognize Yerushalayim as Israel’s ‘‘undivided’’ capital, and Marco Rubio received enthusiastic applause as well as praise from pundits after a speech touching upon sanctions and international attempts to delegitimize Israel.

Meanwhile, the part of Ben Carson’s remarks that drew the most attention was his repeated mispronunciation of Hamas, the name of the Palestinian Islamic militant organization.

To many observers – and Internet users shortly thereafter – it sounded like he was saying ‘‘hummus.’’ And like a hearty plate of that mashed chickpea spread, the puns were simply too good to pass up.

‘‘Ben Carson not just concerned about Hummus terror threat, but about dire situation in Baba Ghanoush and Tabouli,’’ said one Tweet. Another, ‘‘Ben Carson’s biggest issue with Hamas is that it’s too garlicky.” Read more at THE BOSTON GLOBE.