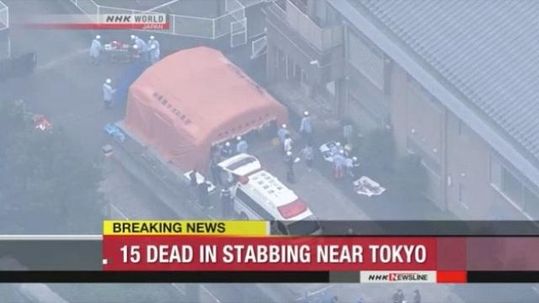 At least 15 people have been stabbed to death at a facility for people with disabilities outside Tokyo, Japanese media reported early Tuesday, describing the kind of mass-casualty attack that is extremely rare in Japan.

A knife-wielding man apparently went on a rampage at the facility in Sagamihara, west of Tokyo. Citing police, the Kyodo news agency said 19 people were dead, while public broadcaster NHK said 15 were killed.

As many as several dozen people were injured, the reports said.

A man in his 20s has been arrested, NHK reported, but there were few details about him or what prompted his bloody assault.

The man was reportedly a former employee and turned himself in to the Sagamihara police station.

“I did it,” the man told police when charged with murder, NHK reported.

The attack was among the worst single-perpetrator mass murder in modern Japanese history.

There was no immediate information about the motive for the attack, although the suspect told the police that he wanted the disabled people “to disappear,” the Asahi newspaper reported.

Among the injured, at least 13 people were in critical condition and were taken to hospitals in Kanagawa prefecture and in Tokyo, the media reports said. NHK broadcast footage of ambulances lined up outside the facility.

The stabbing took place in the Tsukui Yamayuri-en facility in the Midori part of Sagamihara, about 35 miles west of Tokyo. The facility was built by the prefectural authorities and is run by a social welfare service organization called Kanagawa Kyodokai. The people who live there have a wide range of physical disabilities. Some can walk and do outside activities while others are bed-ridden.

The facility provides both residential accommodation and day care and has a swimming pool, gym and medical clinic.

Such bloodshed is highly unusual in Japan, which had one gun death last year. Just eight crimes were committed in 2015 that involved gunfire, according to police.

But there have been occasional high-profile stabbing incidents, including one in 2008 in the city of Akihabara in which seven people were killed after a man in a truck plowed into a crowd of shoppers, then stabbed several bystanders.

The death toll in Tuesday’s rampage was higher than in the 1995 sarin gas attack on the Tokyo subway, carried out by members of the Aum Shinrikyo cult, in which 12 people were killed and 50 severely injured.