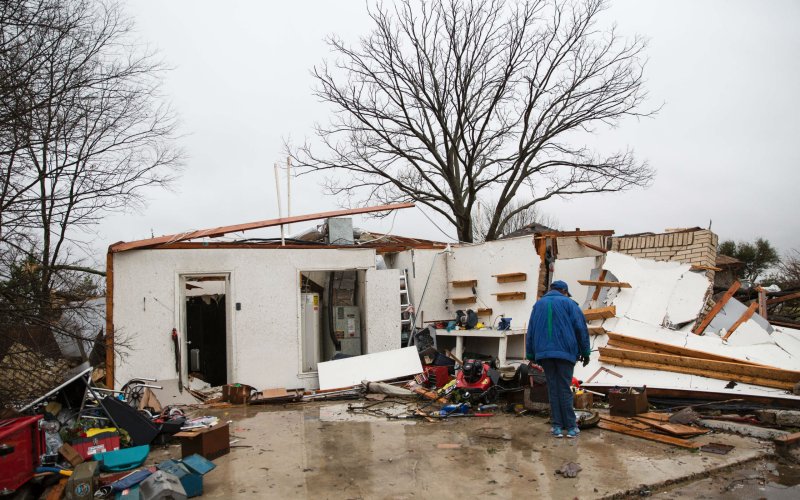 He opened his front door to find two power lines and a mattress lying in his driveway. His patio furniture was hanging from the surviving trees. A car bumper had flown into his pasture, and jagged slabs of wood sprinkled the lawn. Fillmer, 48, got in his tractor and grabbed a chain saw, and then he saw the rest of it: The leveled mobile homes. The dilapidated buildings missing their roofs.

“You didn’t realize how bad it was until you got on the road,” he said. “Now it looks like it’s one of the worst tornadoes.”

At least 23 people were killed, including children, in America’s deadliest tornado outbreak in six years after twisters tore through Alabama, Georgia and Florida, Lee County Sheriff Jay Jones said. The two tornadoes that touched down in Lee County on Sunday wrought a trail of “catastrophic” damage, leaving an untold number of people without homes and in shelters and countless others mourning their loved ones.

Jones said he fears the death toll may only continue to rise as recovery efforts continue Monday.

“We’ve done everything we feel like we can do this evening,” he said. “The area is just very, very hazardous to put anybody into at this point in time.”

Sunday’s tornadoes were the deadliest in the United States since May 20, 2013, when a category EF-5 tornado struck Moore, Oklahoma, killing 24 people and leaving more than 200 injured, according to data from the Weather Service’s Storm Prediction Center. Ten people died in tornadoes in the U.S. throughout all of 2018. Tornadoes also broke out elsewhere in the Southeast on Sunday, including in several counties in Georgia and one in Florida, but none were as severe as in Lee County.

By the end of the night, Jones said some people were still missing. Others had been transported to the hospital with “very serious injuries”; the East Alabama Medical Center announced it had received more than 40 patients, with more coming.

Leigh Krehling, a public information officer for Opelika, Alabama, the county seat, told The Washington Post on Sunday that while the county had experienced tornadoes before, she didn’t believe they’d ever seen anything like this.

“Our folks are suffering here in the county,” she said.

Located about 100 miles southwest of Atlanta, Lee County, which includes the city of Auburn, has a population of more than 161,000 and covers roughly 600 square miles.

The first tornado warnings for the area were issued at 1:58 p.m. local time. Just over an hour later, the National Weather Service reported that a “large & EXTREMELY DANGEROUS” tornado was on the ground near Dupree, Alabama, moving east.

According to the Weather Service, the first tornado to hit Lee County was at least an EF-3, meaning wind speeds were anywhere between 136 to 165 mph and damage is considered to be “severe.” The tornado was estimated to be at least a half-mile wide, the Weather Service said.

Once his phone started shrieking with emergency warnings, Fillmer took cover in his laundry room with his wife and their three cats and a puppy. Jacky Hornaday, who lives several miles from the unincorporated rural community of Beauregard, told The Post she and her three kids hunkered down in the bathtub for nearly two hours, with stuffed animals and blankets to keep the children distracted. The sirens, she said, kept going and going.

Jones told reporters that one of the tornadoes appeared to travel for at least several miles on the ground and was at least a quarter-mile wide,

Scott Peake, a storm chaser, was right on its tail.

He watched it skip across Highway 51, a hulking gray rotating blob. All the yellow headlights whizzed past him, fleeing the storm, while Peake charged right toward it, about a quarter-mile from its path, he said.

“I was close enough that I could hear the roar,” he told The Post. “It sounded like I was in a waterfall.”

The 33-year-old storm chaser has tracked numerous twisters, but the damage he witnessed Sunday was extraordinary. One scene stood out to him: As he headed south down Highway 51 in his Ford Taurus, he drove past a mobile home park near Beauregard where first responders were just starting to swarm. Insulation was scattered all around. “Everything was flattened,” he said. All but one home.

It was hard to imagine what had become of all the people who lived there, he said.

Jones, when describing the damage, said that in some cases, “just slabs [were] left where once stood a home.”

In one case, he said, the contents of one home was found over a thousand yards away. The Lee County Flea Market reported on Facebook that its billboard sign flew across the state line, landing roughly 30 miles away in Hamilton, Georgia. In Cairo, Georgia, about three hours south of Hamilton, Mayor Booker T. Gainor told The Post that more than two-dozen homes in the town of approximately 10,000 had been damaged.

On Twitter, Alabama Republican Gov. Kay Ivey said she extended a state of emergency declaration to the entire state.

“Our hearts go out to those who lost their lives in the storms that hit Lee County today,” Ivey tweeted. “Praying for their families & everyone whose homes or businesses were affected.”

“To the great people of Alabama and surrounding areas: Please be careful and safe. Tornadoes and storms were truly violent and more could be coming,” Trump said on Twitter. “To the families and friends of the victims, and to the injured, God bless you all!”

Back in Beauregard, once it was safe to emerge, Trey Capps made his way over to his family’s business, Capps Sausage, located not far from Fillmer’s property, to survey the damage. Seeing the wreckage on the news, Capps feared the worst, and he found it when he arrived.

The building’s roof was missing, he said. Nearby, a longtime family home that his great-grandfather built had been leveled. Pecan trees that Capps estimated were at least 100 years old were completely gone. The home, he said, was not salvageable, a loss that struck him as “unreal.”

He could only muster one silver lining: “Thank goodness my folks were out of town at the time,” he said, before remembering all those who weren’t.