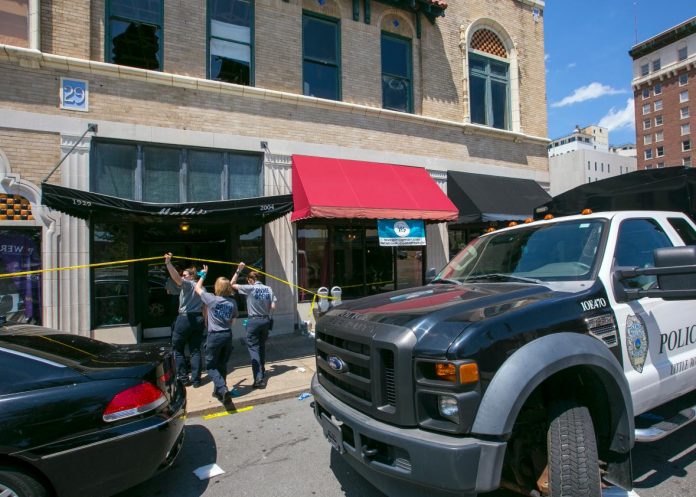 Several others were injured attempting to escape, with reports that some jumped from second-story windows at the Power Ultra Lounge.

Two people were still in critical condition Saturday afternoon, according to police.

“When you force these two communities into a small room and some kind of dispute ensues, it was a recipe for disaster,” Police Chief Kenton Buckner told reporters at a Saturday news conference.

Mayor Mark Stodola told reporters the Power Ultra Lounge would be shut down for unspecific violations. “We’re going to be extra vigilant with the people walking the streets with guns,” he added.

The police department was trying to find multiple suspected shooters.

The rapper who was performing at the club, Ricky Hampton of Memphis, was arrested near Birmingham on a fugitive charge Sunday, according to Jefferson County Sheriff’s office.

It remains unclear if Hampton was arrested in connection to the shooting. Little Rock police had not named any suspects, and said Hampton had outstanding arrest warrants related to violence at shows before Saturday’s performance.

Police did not say what sort of gang dispute was suspected in the incident.

Buckner said it could have been related to about a dozen drive-by shootings that took place in Little Rock the previous week. He also told reporters he was aware of a long-standing feud between groups in Little Rock and Memphis.

Hampton, who goes by the stage name Finese 2Tymes, was performing in Memphis in April when a shooting erupted there, according to WMC Action News 5 – although no injuries were reported that time.

The rapper, who couldn’t be reached by The Washington Post, referred to the violence in the lyrics of a music video posted last month: “I had a shootout at my show. It made the news!”

People packed shoulder-to-shoulder into the lounge late Friday, as seen in Facebook Live video from the concert, which Hampton advertised on social media with a photograph looking down a gun barrel.

Two off-duty police officers were working the parking lot, Buckner said. Shortly before they went home about 2 a.m., the chief said, the officers refused entry to a group of people, one of whom openly carried a gun.

Somehow, the chief said, those people found another way in. About a half-hour later, he said, “some sort of dispute ensued in the audience.”

Hampton was onstage then on a break between sets, as seen in attendee Darryl Rankin’s Facebook video from the audience.

“What are you all doing today?” a man asks a few seconds before more than two dozen shots ring out in rapid succession.

Rankin’s screen goes dark as people scream and attend to the injured.

Courtney Swanigan told Arkansas Online she saw a handgun onstage during the melee. “I just closed my eyes, got down on the ground and put my hands on my head,” she said.

The youngest victim was a 16-year-old boy, police said. His family told a Fox 16 reporter he might never walk again,

In total, 28 people were injured, including three hurt in the chaotic escape.

“I would call it a multiple shooting,” the chief said at an earlier news conference. “Some people call it a mass shooting. Too many people shot. One is too many.”

On Saturday morning, the ground outside the club was littered with glass and empty cups, according to an Arkansas Online reporter, who also saw a strobe light still working inside.

The police said that in addition to looking for suspects and a motive, the department was preparing for the possibility of gang retaliations.

“I would hope not,” Buckner said of a reprisal. “If I were able to predict what they were going to do and when they’re going to do it, we’d probably be a lot more effective.”

A reporter asked the police chief about a recent state law allowing concealed handguns into certain bars and many other places.

“All our elected officials need to take a look,” Buckner said. “Obviously this would be unintended consequences.”

Arkansas Gov. Asa Hutchinson, who signed the law in March, wrote after the shooting, “Little Rock’s crime problem appears to be intensifying. . . . Every few days a high profile shooting dominates the news, culminating with this morning’s event.”

And as police tried to figure out where Hampton was, the rapper issued his own statements on Facebook.

“Blood, sweat, and tears . . . these last 3 months but, this to shall pass,” Hampton wrote Saturday morning. “Stood firm,” he later added.

And in the afternoon, he offered condolences to the injured: “The violence is not for the club people.”

Dozens of Little Rock residents attended a prayer vigil Saturday night, Arkansas Online reported – not for any dead, but for an end to violence in their city.

“We know that chaos came quickly, but God, your grace was sufficient,” the Rev. Carissa Rodgers told those gathered.