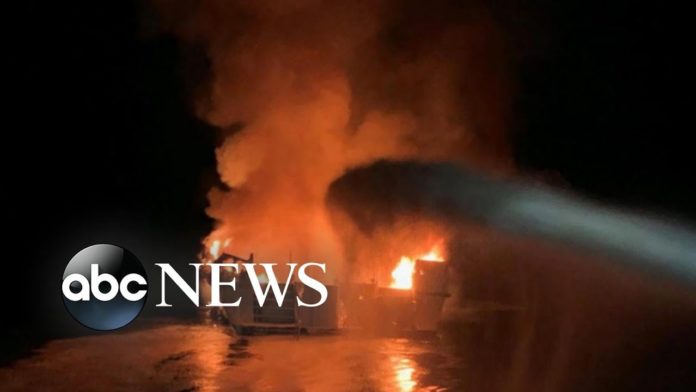 Officials in Southern California say at least 33 people are unaccounted for after a diving boat caught fire near the state’s coastline in the early hours of Monday morning.

The fire began on a boat located near Santa Cruz Island in the Channel Islands, a national park about 20 miles off the coast near the city of Oxnard, around 3:30 a.m., the Coast Guard said.

Coast Guard officials said they believe there were 38 people aboard the vessel. Five people were rescued, officials said, two of whom were injured. Emergency workers from the counties of Ventura and Santa Barbara were assisting in the efforts, and a search was underway for the rest.

Bill Nash, a spokesman for Ventura County, said that officials believed the boat was on a scuba trip in the area. It was located near a harbor on the island, he said, raising hopes that some of the missing had swum to shore. But officials expected fatalities, he said.

Mike Eliason, a spokesman for the Santa Barbara County Fire Department, said that the boat, Conception, had launched from Santa Barbara. He said that 34 people were missing from the boat. Eliason said the boat is registered to the company Truth Aquatics, which runs diving trips and also charters boats for private excursions. A person who picked up the phone at the company declined to comment before hanging up.

Conception, built in 1981, can sleep up to 46 people on 13 double bunks and 20 single bunks that are stacked in rows of two and three below the boat’s galley, according to Truth Aquatic’s website.

Ventura County Fire Department spokesman Captain Brian McGrath said that officials were in the process of getting a more accurate manifest for the ship and cautioned that preliminary numbers of those aboard and missing could change. He said that the boat had sunk.

The Channel Islands is a popular destination for lovers of the outdoors and marine life. Nash said that the county dealt with the occasional boat fire but rarely on vessels with as many people on it.