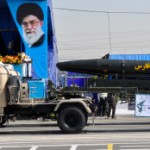 Responding to Iranian social media reports that details had been finalized for an agreement, the Israel Project’s Omri Ceren said the development “means the Americans may have collapsed on Iran’s last-minute demand that the United Nations arms embargo be lifted.”

“Instead of adding restrictions on Iran’s ballistic missile program, the deal will roll back the existing ones” by lifting domestic sanctions and ending the U.N. arms embargo that specifically restricts these weapons, said Ceren.

Critics of the Obama administration’s ongoing negotiations with Iran fear the U.S. has caved to each of Ayatollah Ali Khamenei’s recent pronouncements regarding Iran’s “red lines” for a nuclear deal, such as curbing its intercontinental ballistic missile program.

Khamenei even called on the Iranian Revolutionary Guards in May to “mass produce” these weapons, about a month after the Lausanne framework agreement announced in April by negotiators from Iran and world powers included no reference to the ICBM program at all.

On Tuesday, House Foreign Affairs Committee Chairman Ed Royce (R-CA) noted that Iran has the Middle East’s largest ballistic missile program, and he questioned Iran’s development of these missiles, which are used mostly to deliver nuclear, chemical or biological payloads.

Hudson Institute senior research fellow and former Department of Defense official Michael Doran warned the committee that the nuclear agreement essentially meant the U.S. was “managing Iran’s rise” across the Middle East, as the country’s soon-to-be unfrozen assets can be funneled into its military procurement. Already, with sanctions in place, Iran and the groups it backs have destabilized several countries in the region, such as Yemen, Iraq and Syria. U.S. defense officials and lawmakers expressed concern on Tuesday that the conflicts in Iraq and Syria, where Iranian-backed groups are fighting the Islamic State and other Sunni groups, will ultimately destabilize security in relatively calm Jordan.

“As a literal bonus, the Iranians will get hundreds of billions of dollars to purchase and build their now-permitted weapons. And in the meantime, the build-up will be taking place under the international community’s protection,” said Ceren.

On Monday, Russian Foreign Minister Sergei Lavrov said the weapons embargo was the “last sticking point” facing negotiators in Vienna, though Russian officials said on Thursday that a deal could be struck by the end of the day. Russian companies could stand to rake in at least $7 billion in arms deals to Iran over the next decade, if international sanctions are lifted, according to Bloomberg.