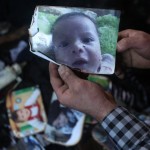 The main suspect in the July arson attack that killed a baby and his parents in the Palestinian town of Duma met with his attorney early Tuesday morning, December 22.

The suspect had previously been banned from meeting with his attorney for three weeks.

The suspect has been held in administrative detention along with several other young men, which has led to some public outrage. They are being interrogated by the Israeli Security Agency (Shin Bet) for allegedly committing the attack.

The suspect’s lawyer described the severe torture methods he claims were employed by the interrogators.