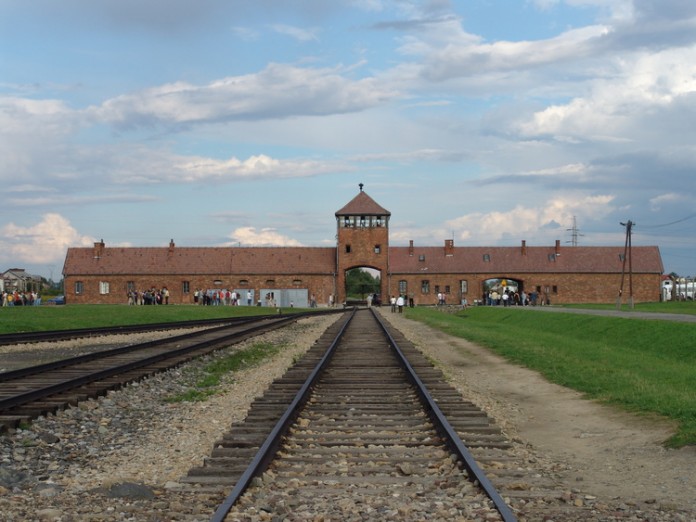 Orthodox Jews in German Nazi concentration camps secretly—and defiantly—continued to practice their faith at the risk of immediate death; and educators at the Auschwitz-Birkenau State Museum in Poland are now expanding on the experiences of these victims thanks to a new education program presented by the Amud Aish Memorial Museum and Kleinman Holocaust Education Center.

Educators from Amud Aish travelled from Brooklyn to Poland to train Auschwitz Museum guides—through lectures and tours—to be able to comprehensively relay the experience of the Orthodox Jews imprisoned there.

“The one million Jews who perished at Auschwitz-Birkenau, and those who survived, were predominantly religious. Although the war turned their lives upside down, many still maintained their beliefs. As a result, their suffering was experienced through the lens of their faith,” said Amud Aish director Rabbi Sholom Friedmann. “The new, fuller account that is now part of the education program at Auschwitz acknowledges the different ways that Orthodox Jews faced one of the worst chapters in history.”

For years, the Auschwitz Museum has worked closely with Yad Vashem and the United States Holocaust Memorial Museum to uncover the depth of the Nazi atrocities perpetrated against the Jews at Auschwitz. Recently, with the increase in Orthodox Jewish tours to the museum, it became apparent to tour guides that they needed more information on how Orthodox Jewish prisoners lived through this time.

“For the very first time, the complex topic of dealing with the reality of the German Nazi Auschwitz concentration and extermination camp by Orthodox Jews was analyzed in such an exhaustive manner and presented to Museum educators. They were provided with an important tool which will enable them to present this question both to visitors who are not involved in Jewish orthodoxy as well as to Orthodox groups, as their presence in the Museum is constantly increasing,” said Andrzej Kacorzyk, director of the International Center for Education about Auschwitz and the Holocaust at the Auschwitz Memorial.

Through lectures and tours of the camp, Auschwitz museum tour guides, or docents, were taught how religious victims struggled to maintain their identities and fought to observe their faith. They also explored the questions that victims posed to rabbis in a treacherous and deadly world.

The guides were shown how they can use some of the stories and discussion topics at six different stops during a tour. One stop is at the kitchen and a picture of the camp orchestra. The Nazis used music to debase and humiliate the victims. Another stop includes testimonies about how Jews used barrels to clandestinely build a sukkah in Auschwitz III-Monowitz in 1943 as well as how they secretly held prayer services and continued to wear religious garments under their uniforms. If caught, Jews doing any of those things would have faced immediate death.

Another stop in the Male Camp in Birkenau includes the exact location where questions were posed to Rabbi Zvi Hersch Meisels on the practice of ransoming boys’ lives, selected for the gas chambers: could a father ransom his son’s life knowing it meant the ransomed boy would be replaced by another victim?

The Auschwitz Museum received nearly 2.1 million visitors in 2016, a new record in its 70th year of existence. The majority of visitors took tours with the museum’s 286 guides who collectively speak nearly 20 languages. All tour groups are led by Auschwitz-trained docents.

About the Auschwitz- Birkenau Memorial and Museum

Auschwitz-Birkenau was the largest of the German Nazi concentration camps and extermination centers. At least 1.1 million people lost their lives there between 1940 and 1945—mainly Jews (ca. one million), and also Poles (ca. 70,000), Sinti and Roma (ca. 21,000), and Soviet POWs (ca. 15,000). The post-camp relics are protected and preserved by the Memorial created in 1947. In 1979, the site was entered onto the UNESCO World Heritage List. The present Memorial consists of the Collections, the Archives, and a research, conservation and publishing center. In 2005, on the initiative of survivors, the International Center for Education about Auschwitz and the Holocaust was created. In order to finance the preservation of all the authentic remains of the former camp, the Auschwitz-Birkenau Foundation was created in 2009. Its aim is to create the Endowment Fund of 120 million Euros. Revenue acquired is allocated to the financing of long term preservation works.

Amud Aish is dedicated to documenting the micro-histories of observant Jewish victims and the role of faith within the broader context of the annihilation of European Jewry. It will service the public and students at its soon-to-open permanent museum location that incorporates the Kleinman Holocaust Education Center, the Orthodox Testimony Project (in partnership with the United States Holocaust Memorial Museum), a document and research archive, and an artifact collections archive. Amud Aish is active globally through its International Division, with current projects in Poland, Belgium and Hungary.  Amud Aish will open its permanent location in Boro Park, Brooklyn, in 2017. It currently has a temporary facility in Mill Basin, Brooklyn, with future annexes in Lakewood, New Jersey, and Jerusalem. Learn more at amudaish.org and follow us on Facebook: @amudaishmm.