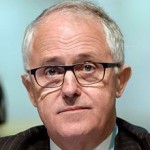 With a mere 10 months to go before the next general election in Australia, Prime Minister Tony Abbott was replaced by fellow Liberal Party member and Communications Minister Malcolm Turnbull through an internal vote on Saturday.

The 54-44 vote that ousted Abbott and ushered in Turnbull took place just in time for Rosh Hashanah, the Jewish New Year, causing the media to bring up old statements made by the new leader about his self-proclaimed Jewish roots.

Indeed, in a 2013 interview with The Australian Jewish News, Turnbull had commented, “My mother always used to say that her mother’s family was Jewish.”

Though Turnbull admitted to the paper that he had “never researched” this, nor would “know where or how [he] would do that,” the mention that his possible Jewishness hails from his mother and maternal grandmother constitutes a kind of (likely unwitting) signal to and among members of the tribe – whose religion is based on matriarchal lineage – that if there is truth to the claim, Turnbull would be considered a Jew by Jewish law.

What he did stress at the time was his appreciation for the “strong traditions of family and the whole heimishe [Yiddish for homey] atmosphere of the Jewish community, which I’m sure some people don’t like, [but] for me – as someone who is a good friend, but not part of it – I find very admirable.”

According to the AJN, Turnbull often uses common Yiddishisms, such as “chutzpah;” attends weekly Jewish events in Sydney; is a donor to and supporter of Jewish organizations; and is considered a personal friend by many Jewish community leaders.

One such leader is Isi Leibler, who served four terms as president of the Executive Council of Australian Jewry, from 1978 t0 1995. Leibler, a Jerusalemite since 1999, also chaired the World Jewish Congress governing board.

Speaking to The Algemeiner on Wednesday, Leibler recalled fondly Turnbull’s visiting him in Israel some years ago.

“I found him to be a tremendous friend to and ally of Israel. I have no doubt that he will strengthen Australia’s relationship with Israel – which is already strong, like that of Canada,” said Leibler, who already sent Turnbull a congratulatory letter.

Leibler also put in a good word for Abbott, whom he called “deeply emotionally supportive of Jews and Israel,” claiming that “members of the Jewish community will be sorry to see him go.”

But Turnbull, said Leibler, “is the most intelligent parliamentarian in the Australian House of Representatives. His pro-Israel stance, too, is both intelligent and sophisticated. He has an extraordinary track record of good relations with the Australian Jewish community and Israel.

“He also represents a constituency in New South Wales that has more Jews than any other constituency.”

Where Turnbull’s potential Jewish heritage is concerned, Leibler is dismissive.

“I hadn’t heard that about him. Nor is it the least bit relevant,” Leibler said. “The man himself and everything he stands for is based on liking Jews and Israel. That’s what’s important, as is his outspoken opposition to the Iran deal and radical Islam. Not so, Foreign Minister Julie Bishop, if she stays in her position under Turnbull; she has done strange things. She is committed to Israel, but has come out in favor of the Iran deal, for example, possibly swayed by [U.S. Secretary of State] John Kerry.”

Leibler concluded by saying that though Abbott was “likable,” he probably would not have won the next election.

Furthermore, he added, “Turnbull has the makings of a real leader – another John Howard plus.”

A similar, albeit more official, sentiment was expressed by the Executive Council of Australian Jewry, whose president, Robert Goot, and executive director, Peter Wertheim, released the following statement today:

The Executive Council of Australian Jewry, the elected representative body of the Australian Jewish community, conveys its heartiest congratulations to the Honorable Malcolm Turnbull MP, on his election to the position of Leader of the Liberal Party of Australia, and on being sworn in as the 29th Prime Minister of Australia.

We also extend warm congratulations to the Hon. Julie Bishop MP on being re-elected as Deputy Leader of the Liberal Party and continuing as Foreign Minister. We wish the Prime Minister, the Deputy Leader and their team every success in guiding our nation. May they be blessed with the wisdom, vision and courage to discern and do what is right and in Australia’s national interests in the decisions they make on behalf of the country.

We also congratulate the outgoing Prime Minister, the Hon. Tony Abbott MP on his term of office as head of the government and leader of the Liberal Party. Tony Abbott did much to strengthen the security of all Australians, an issue of paramount concern to our community. We also commend him for his unerring support for the State of Israel, particularly in times of war and conflict when its duty to defend its citizens was fiercely challenged, and in the face of disgraceful prejudice and discrimination in international forums, not least the United Nations.

The State of Israel has been blessed with many friends among international leaders, none of them more sincere than Mr Abbott. We wish Mr Abbott, his wife Margie and their three daughters, Bridget, Frances and Louise, all the very best for the future.

In a statement following his weekend victory, Turnbull stressed his commitment to his party’s worldview.

“Our values of free enterprise, of individual initiative, of freedom, this is what you need to be a successful agile economy in 2015,” he said. “What we have not succeeded in doing is translating those values into the policies and the ideas that will excite the Australian people and encourage them to believe and understand that we have a vision for their future.”