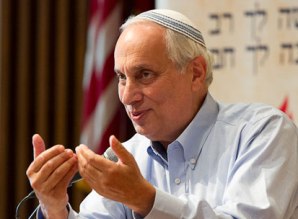 I heard of him, beginning many years ago, as a fighter for Soviet Jewry, against the desecration of Auschwitz, and various other important causes.  Known as a person brimming over with a love of Jews and a passion for fighting against abuse of their rights, he was a beloved figure from afar.

Over the past several years, however, I have come to see a different side of Avi Weiss, one that in my opinion has caused tremendous damage to Orthodox Judaism both here in the United States, and now in the State of Israel.  The damage was caused because Avi Weiss has decided to begin a new form of Judaism, called “Open Orthodoxy”, and to promote it with all the public relations skills that he honed as a rabble-rousing fighter for all of those good causes, to the detriment of our Holy Mesorah and the good of Klal Yisroel.

I am not going to go into the history and the damage that has been done by Open Orthodoxy in this article, as I wrote about that topic in a recent column entitled “The Hellenists or the Maccabees – Which side are we Open to?”.  ( Please see that article , which contains references to several other important articles).   Briefly, they introduced innovations beyond the bounds of Halacha that any mainstream Posek would agree with including: the rabbinic ordination of women, the celebration of and advocacy for gay marriage, the introduction of “partnership minyanim”, the lowering of conversion and divorce standards, and the acceptance of beliefs that negate some of the core beliefs of Judaism as understood by all those who cherish and uphold our traditional Mesorah.  These distortions of our Mesorah, and the pretense that they represent legitimate views within Halachic Judaism, continue to lead many astray from Orthodoxy.

The precedent has now been set that it is possible to pressure the Rabbanut into lowering their standards for what is acceptable as a rabbinic standard.  The cudgel will be taken up, and soon, by the Reform and conservative movement, who have for years been arguing for equal recognition as Rabbis in Israel.

Today, however, I write to comment on the incredible damage that happened in Israel over the last two weeks; damage that I fear will forever change the religious status quo in Israel much for the worse. In order to understand that damage, one needs to know a little about the history of the Chief Rabbinate in Israel.
The first Chief Rabbi of Eretz Yisrael in modern times, the sainted Rav Avraham Yitzchok Hakohen Kook zt”l, was an incredible scholar, saint and lover of Israel, one of the greatest Gedolim of recent times.  He was strongly opposed by the Chareidi world, who saw him as lending legitimacy to the Zionist movement, but nevertheless greatly respected by their leadership, particularly Rav Yosef Chaim Sonnenfeld zt”l, Rav of the Eidah Chareidis.  He passed in 1935, which predated the War of Independence and establishment of Israel by 13 years.

One of the most important roles of the Chief Rabbinate (Rabbanut) , had nothing at all to do with the Zionist movement, and is perhaps one of the main reasons that Rav Kook allowed himself to get involved in such a thankless office.   Under Turkish law, which was the law of the land before World War I and continued to a great extent through the Mandate period and until today, matters of personal status such as marriage and divorce are handled by each person’s religious authority, rather than by the government.  Thus it is necessary for a Muslim to go the Waqf to register a marriage, for a Christian to go the Ecclesiastical Authority, and for a Jew to go to the Rabbanut.   There is no such thing as a secular marriage or divorce, it must be handled through the Religious Authority.  The religious authorities are quasi-governmental bodies that are overseen by the Ministry of Religions (plural) for each ethnic/religious group.

This unusual arrangement has benefited the cause of Torah greatly in matters of yuchasin, or personal status under Halacha.   Israel has largely, till now, avoided one of the saddest problems of Jewish life in the Diaspora, where it is becoming more and more difficult to be certain whether a person one meets is, in fact, Jewish and not a mamzer.   In America, for instance, a very large percentage of Jews have questionable status as Jews, due to two major factors.

(1) Virtually all reform, conservative, and even a significant number of “Orthodox” conversions are Halachically questionable, at best, given that there was no real Kabbalat Mitzvot (acceptance of the obligation to perform mitzvot), even some as basic as the laws of Kosher food, Shabbos, and Family purity.  If the convert never accepted those obligations, their Jewish status is very suspect, at best, in the view of Halacha.

(2) Divorces that were not done properly according to Halacha resulted in the former spouses marrying others while in the eyes of Halacha they are still married, resulting in offspring who may be illegitimate – mamzerim – Heaven forfend.

In Israel, by contrast, there was control over these areas, due to the law that the Rabbanut was the sole authority over Jewish marriage and divorce law, and had the power to accept or deny what it considered to be illegitimate conversions.

Unfortunately, all has not been well at the offices of the Rabbanut for some time now.  The stories of less than stellar treatment of people, the callousness that some have been subject to by the functionaries there, the lack of “user-friendliness” for irreligious people have caused much animosity.  The fiercely secular media, which chafes under the notion that one must go to the Rabbinate for marriages and divorce, ceaselessly look for the most negative possible way to portray any story.  On top of that, the scandal that was associated with the former chief Rabbi has sullied an already bad reputation and caused much harm.

Enter, last week, Avi Weiss.   The Rabbanut, in keeping with its long standing practice of non-acceptance of certificates produced by non-Orthodox Rabbis, declined to honor certificates signed by Avi Weiss, given that he has placed himself outside of the Orthodox world by any measure of standard Halacha.   Unfortunately, rather than seeing this as a deserved rebuke to his shenanigans, the old rabble rouser cranked up his public relations machine, and enlisted everyone from the secular press, his congressman. the Jewish Federation, secular government ministers and even Alan Dershowitz to protest this turn of events.   Falsifying the facts, he claimed that this was an attack by the Hareidi Rabbanut against Modern Orthodox American Rabbis in general.  In point of fact, the Rabbanut has little or nothing to do with the Chareidi world, and the disqualification was not of Modern Orthodox Rabbis, but rather of Open Orthodox rabbis, who are a very different breed.

No matter the truth, the Rabbanut was forced to bow to all of the enormous pressure, and accept Avi Weiss’ letters.   This was spun as an achievement for the RCA (Rabbinical Council of America) who negotiated an agreement whereby, from now on, they will be in charge of certifying the credentials of RCA members who wish to send letters of certification to the Rabbanut.  In my view, this is a tremendous failure on the part of the RCA, who have refused to expel Avi Weiss despite his clear abrogation of agreements with them to not ordain female Rabbis.   Had the RCA done so several years ago, the Rabbanut would have not been under such pressure to certify Avi Weiss, as they could have pointed to his censure by the American Orthodox Rabbinate.

The damage done here is tremendous.   The immediate damage is the spectacle of the Open Orthodox rabbis parading their “victory”, and claiming that the Rabbanut has certified them as being fully Orthodox, further strengthening their deviations as legitimate in Jewish life in the eyes of many.

But the larger danger is that the precedent has now been set that it is possible to pressure the Rabbanut into lowering their standards for what is acceptable as a rabbinic standard.  The cudgel will be taken up, and soon, by the Reform and Conservative movement, who have for years been arguing for equal recognition as Rabbis in Israel.    Now that the Rabbanut has been forced to bend, the blood is in the water. It is, unfortunately, only a matter of time before the Rabbanut will be forced to either recognize  non-orthodox conversions and divorces, or to close down as an institution.   The bulwark that has protected the status of yuchasin in Israel will in all likelihood be breached, much to the detriment of Klal Yisrael.

This is the essence of Avi Weiss’ great victory.   Quite an achievement indeed.

*I am intentionally not referring to Avi Weiss as “Rabbi.”