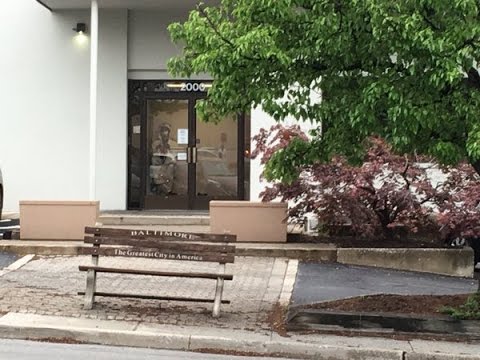 A man wearing what was described as a “panda suit” was shot by police after he stormed a Fox station in Baltimore and threatened to blow it up.

At around 3:30 p.m., as police gave a news conference outside Fox 45 following the shooting, a robot was approaching the suspect, who appeared to be alive with one hand in his pocket, to assess further risks. At around 4:30 p.m., authorities were able to get the man into an ambulance and away from the scene after removing his clothes.

The incident began around 1 p.m., when a strangely dressed man with a suspicious device told a security guard in the station’s lobby that he needed to transmit a message. Police responded to the station at around 1:20 p.m.

“This person had on some sort of outfit,” T.J. Smith, communications director for Baltimore police, said. “He had a surgical style mask or something over his face.” The man displayed “what appeared to be wires” that “appeared to be some type of explosive device.”

“Someone came into the front of the building and they apparently said that they had some information they wanted to get on the air,” news director Mike Tomko told the station’s reporters. “I came down at one point not knowing the person was in the lobby, near the vestibule area. He talked to me and was wearing what appears to be a full body white panda suit, surgical mask and sunglasses. He had a flash drive, said he had information he wanted to get on the air. He compared it to the information found in the Panama Papers. I told him, ‘I can’t let you in, you’re going to have to leave the flash drive here and slide it through the opening.’ He wouldn’t do that. Apparently he had made some threats before.”

“I saw him from across the street,” Fox reporter Paul Gessler told The Washington Post in a phone interview. “It was like an all-white painter suit, almost — like a onesie-type suit.”

Jourael Apostolides, a Fox security guard, told reporters that the man had a “hedgehog onesie” outfit on. The man said he had a bomb and wanted to transmit a message from a flash drive that discussed the composition of the sun. The message was that “the government” was “wrong” in how it thought about “anything in space,” Apostolides said.

Apostolides said he was concerned about two other people present when the man made his alleged threat.

“My first thought was to get them out of there,” he said. “Then I tried to calm him down.” Apostolides said he offered the man food, water, and a chair to sit down on. Apostolides added: “Everyone needs someone to talk to.”

Photos from the scene in Baltimore after man in panda costume causes bomb scare
View Photos A television station in Baltimore was evacuated after a man in a ‘panda suit’ threatened to blow it up.
Meanwhile, a vehicle was set on fire in the station’s parking lot, police said. Though they doubted the incident was coincidental, they were not positive it was related to the man in the outfit.

“It appeared to be arson-related,” Smith said. “… There was a rag inside of the gas tank area of the vehicle. [There] was no type of explosion, no type of bomb detonated at any time.”

At around 3 p.m., the suspect was shot by police, but not killed, when he emerged from the building and started advancing towards officers. He didn’t listen to officers when they told him to take his hands out of his pockets, Smith said.

“I wish we were in a position to render first aid to him immediately,” Baltimore Police Commissioner Kevin Davis told reporters as the robot approached the man. But Davis said the suspect could do additional harm, and might be attempting to trigger an explosive device.

Police said the suspect appeared to be in his 20s, and that they did not know what provoked the attack. Reporters asked whether the incident might be related to an attack on ABC2 in Baltimore in 2014 in which a man crashed a truck into the station.

Local Headlines newsletter
Daily headlines about the Washington region.
Sign up
“Public spaces, places where people get their news from … are occasionally vulnerable,” Commissioner Davis said.

In live coverage on ABC2, meanwhile, reporters commented on the thwarted attack’s similarity to the plot of “Money Monster,” a forthcoming movie starring George Clooney and Julia Roberts.

The man was transported in an armored vehicle to a hospital by officers in tactical gear at around 4:30 p.m.