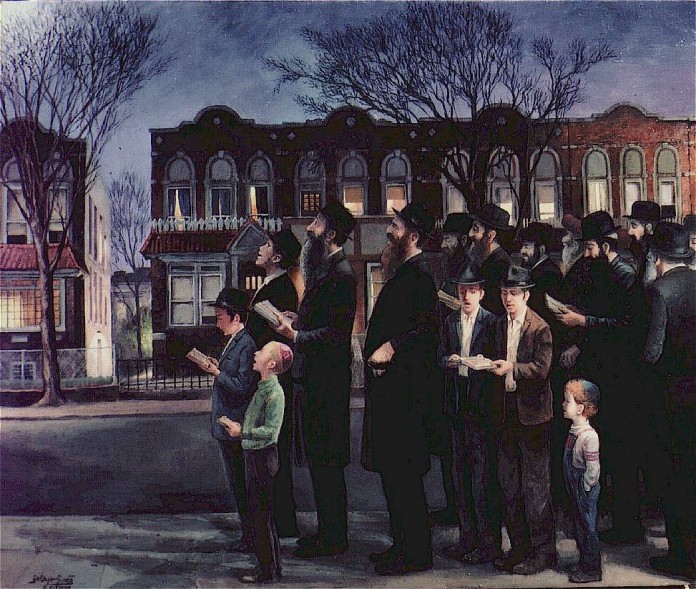 The following was written for his Kehilla in Baltimore by Rabbi Dovid Heber, Kashrus Administrator at Star-K and Rav of KAYTT. Other communities in the Mid-Atlantic Region and East Coast may have a similar issue. [Note: All times are for Baltimore. Exact times may be slightly different in other cities, check your local luach].

What is the best solution? Kiddush Levana may be recited from the time it gets dark until dawn. The best chance seems to be tonight as tomorrow night is supposed to be even cloudier than tonight. I spoke to Mr. Bill Lerner and he explained that tonight’s storm is fast moving and not as widespread as last night’s, so there is a good chance that there will be a break in the clouds. Start checking at 8:30 pm and when the moon is clearly visible recite Kiddush Levana.  “Clearly visible” means you can clearly see the outline of the moon as it shines in the night sky. Although Kiddush Levana is ideally recited b’rov am (i.e. with at least two other people), it may be said alone and is advisable on a night like tonight when that might be the only option before it gets cloudy again.

If it does not clear up before you go to sleep, consider setting your alarm for 3:15 am. After Negel Vasser, etc. and ideally recite Birchas Hatorah (because of the psukim recited during Kiddush Levana) and then go outside. The moon will be in the southwest sky – relatively low in the sky so it may be blocked by a tree or building. Find an unobstructed view of the southwest sky. A good example of this direction with minimal obstruction is when you go up Clarks Lane from Park Heights Ave. as you approach Reisterstown Road you have a relatively unobstructed view of the southwest sky above the Reisterstown Road Plaza. This is just an example – if it is not cloudy, at 3:15 am, it should still be high enough in the sky to see from an ideal spot outside your home.

Kiddush Levana may be said tonight until shortly after 5:00 am. but by then it will almost be setting and very difficult to see. Practically speaking you want to try to find the moon and say Kiddush Levana by 4:30 am – if the sky is clear. If you do not say it tonight, hopefully the forecast will change for tomorrow and it will clear up.

In the zchus of being moser nefesh to fulfill this important mitzvah, may the famous words in Kiddush Levana – Siman Tov u’mazal tov be sung in our shul and homes on many future occasions.