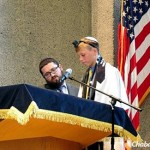 Members of the Walas family were looking forward to the bar mitzvah of their youngest son, Liam, and having him follow in the footsteps of his older siblings.

There was just one problem. Liam’s older brother, Avery, is a cadet at the U.S. Military Academy at West Point in New York, and when they were planning the event a few months ago, it looked like he wouldn’t be able to make the Torah reading at Chabad of Mid Suffolk in Commack, N.Y., scheduled for Oct. 17 So Stephen and Patti Walas turned to Rabbi Mendel Teldon, director of the Long Island Chabad House, to see if they could do something at the military academy itself.

“I thought it sounded like a really cool idea,” Rabbi Teldon relates, “so I said give me a month to figure it out.”

During that time, the rabbi worked the phones trying to find out if it was even possible to have a bar mitzvah at West Point, some 75 miles to the north. He called the Aleph Institute in Florida, which works with and supports Jewish military families. He also spoke with U.S. Chaplain Col. Jacob Goldstein, who recently retired from the Army after nearly 40 years of service, and West Point Rabbi and Chaplain Maj. Henry Soussan, who was very supportive of the family’s desire to have a ceremony on campus.

As the calls went back and forth, Teldon also had to consider what kind of service to hold since Liam was going to get his first aliyah at the Chabad House in Commack.

“We decided to go ahead with it and created a ceremony that involved the whole family,” says Teldon. It took place on last Sunday at West Point’s Jewish chapel, though without a Torah reading; that happened this past Shabbat morning.

Most importantly, the ceremony included Avery.

“Being the third time that Rabbi Mendy performed a bar or bat mitzvah service for our family, this last one was bittersweet,” says Stephen Walas. “Bitter that it was our last one and sweet because of the extra-special location—the Jewish synagogue at West Point.”

About 100 people—mostly family and friends, along with a few military members—attended the West Point service. They watched as Liam stood on the bimah, and put on a talliS and tefillin. They listened as various brachos and tefillos were recited, and words of inspiration and gratitude were offered.

And what they probably didn’t realize sitting at West Point was that Rabbi Teldon was part of the reason Avery Walas was at the military academy in the first place. Avery needed a letter of recommendation for the admissions process, so Teldon arranged for a two-star general who lives in the area to pen the letter.

Reflecting on the week, the family notes that things could not have gone any better.

Says Patti Walas: “It was a joyous time, and we were so thrilled that we could share it all with Rabbi Mendy.”