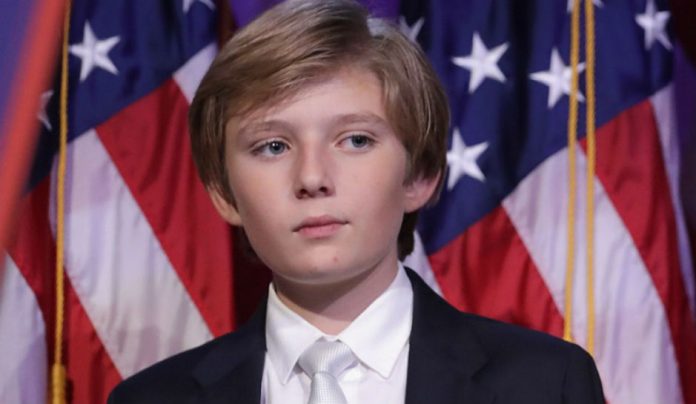 Barron Trump, the 11-year-old son of President Donald Trump and first lady Melania Trump, will attend the private St. Andrew’s Episcopal School in Potomac, Maryland, this fall after he moves from New York to Washington with his mother.

Barron Trump is finishing out the current school year at Columbia Grammar and Preparatory School on the Upper West Side of Manhattan, where he is believed to be in fifth grade. He is expected to move to Washington this summer. He will be the first presidential child to attend St. Andrew’s, a co-educational college preparatory school that was founded in 1978 and educates about 580 students from pre-kindergarten through 12th grade.

The White House had planned to hold off until summer to make the announcement – in part because of concern that St. Andrew’s might become the site of protests while school was still in session. But parents began to ask questions and express security concerns as rumors surfaced, and school leaders decided to tell their community on Monday in a letter. In response to that decision, first lady Melania Trump said in a statement:

“We are very excited for our son to attend St. Andrew’s Episcopal School. It is known for its diverse community and commitment to academic excellence. The mission of St. Andrew’s is ‘to know and inspire each child in an inclusive community dedicated to exceptional teaching, learning, and service,’ all of which appealed to our family. We look forward to the coming school years at St. Andrew’s.”

St. Andrew’s officials did not immediately return calls about Barron Trump. Late Friday, the head of the school, Robert Kosasky, said in an e-mail that the school “respects family privacy” and can’t talk about any specific student.

St. Andrew’s, where tuition will cost the Trumps about $40,000 a year, is known for its pioneering use of brain-based research to help students of all abilities to succeed and providing extra support for students who need it. Class sizes are small — usually 11 to 13 students — and the school says that all of its graduates go to college, including Ivy League schools, small liberal arts colleges, state schools and schools of art, engineering and design. The school also says athletics are an “integral part” of its educational program. Among numerous sports, it offers golf, a favorite of Barron’s.

The school’s website says it strives to educate students “in an inclusive environment that embodies the faith and perspective of the Episcopal Church” and that it “seeks a broadly diverse community to promote educational excellence.” The school’s programs, it says, “are designed to serve students of varied interests and abilities capable of achievement in a challenging academic environment.”

In light traffic, the ride from the White House to St. Andrew’s, in the elite enclave of Potomac, is a little more than 30 minutes.

With a 75,000-square-foot classroom building on the 19-acre campus where the middle and upper schools are located, St. Andrew’s boasts impressive facilities. They include a 14,000-volume, two-story library with an audio-visual classroom and a periodical reading room; a multi-purpose theater/assembly/lunch space that features a stage and light/sound booth; two visual arts studios with ceramics wheels and a kiln; a darkroom; two full-size basketball courts, a fitness room, dance studio, and two full turf fields for softball, baseball, lacrosse, and soccer.

In 2011, St. Andrew’s opened its Center for Transformative Teaching & Learning, in partnership with Johns Hopkins University School of Education, to help teachers apply the best research on teaching, learning and the brain to the classroom. In 2013, it was invited by Harvard University’s Graduate School of Education to become the eighth school to join a global network of schools that conducts cutting-edge research and leads professional development in that area.

The president identifies as a Presbyterian, but it is not uncommon for people of different denominations and religions to attend St. Andrew’s. Trump’s eldest daughter, Ivanka Trump, converted to Judaism, and she and her husband, Jared Kushner, who moved to Washington to serve in the administration, send their young children to two Jewish schools.

Numerous other modern presidents have been faced with the same decision, with nearly all choosing private schools over public. In the past half century, only President Jimmy Carter sent his child to a D.C. public school while in the White House. The choice of St. Andrew’s for Barron Trump marks the first time in decades that an incumbent president with a school-age child has picked a school other than Sidwell Friends, an elite Quaker school with campuses in the District of Columbia and Bethesda, Maryland.

President Barack Obama’s daughters Malia and Sasha enrolled at Sidwell in 2009. Malia Sasha graduated in 2016, took a gap year, and will attend Harvard University in the fall. Sasha is a rising junior. The Obamas decided to stay in Washington after leaving the White House so she could finish high school at Sidwell.

President George W. Bush’s twin daughters, Barbara and Jenna, graduated from high school before he was in the White House. They both attended Austin High School in Texas.

President Bill Clinton’s daughter, Chelsea, went to Sidwell, and the president gave the commencement speech the year she graduated. Hillary Clinton helped persuade the Obamas to send their children to Sidwell.

President Gerald Ford’s daughter, Susan, went to Holton-Arms School in Bethesda. Her senior prom was held at the White House.

President Richard Nixon’s daughters, Tricia and Julie, both attended Sidwell (and after the White House, the Chapin School in New York).