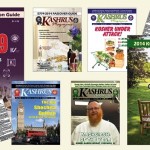 KASHRUS Magazine, the Brooklyn-based periodical for the kosher consumer, has chosen Barry Nash of Bergenfield, NJ as their 5th annual “Mashgiach of the Year” and presented him with a check for $1,000. The presentation was made on November 11 at Kosherfest, the world’s largest trade show for the kosher industry.

Barry Nash was chosen from among the nominees of the 1,324 kosher agencies worldwide. He has worked for the Rabbinical Council of Bergen County (RCBC) for 21 years as the mashgiach at the Moriah School, a Jewish day school in Englewood, NJ. He oversees kosher production of meals for 900 children, including special meals for allergic or special needs children. In addition, Mr. Nash works on the weekends for a number of caterers in the New Jersey region, and is the mashgiach at Camp Monroe in Melville, NY in the summers.
The sponsors of the “Mashgiach of the Year” Award were Diversified Communications, the producers of Kosherfest; Costa Rica Kosher Adventures (www.costaricakosheradventures.com); and Kosher Vitamin Express (www.koshervitamins.com).

“A mashgiach is not only the ‘eyes and ears’ of the kosher certifying agency,” said Rabbi Yosef Wikler, editor of KASHRUS Magazine, “but he is also the representative of kosher and Judaism to the staff in his facility and to the administration of the company he works for. Barry Nash has displays daily how a mashgiach can impact on those around him: the kitchen staff, children, teachers and administration. He is known for his special care in providing for each child’s personal needs, and his efficiency in maintaining kosher standards.”

KASHRUS Magazine’s December/January issue will feature an interview with the “Mashgiach of the Year.” To receive a free copy of that 6-page interview and report, email KASHRUS Magazine at kashrus@aol.com, send a self-addressed, stamped envelope to KASHRUS, Mashgiach Award, POB 204, Brooklyn, NY 11204, or call 718-336-8544.