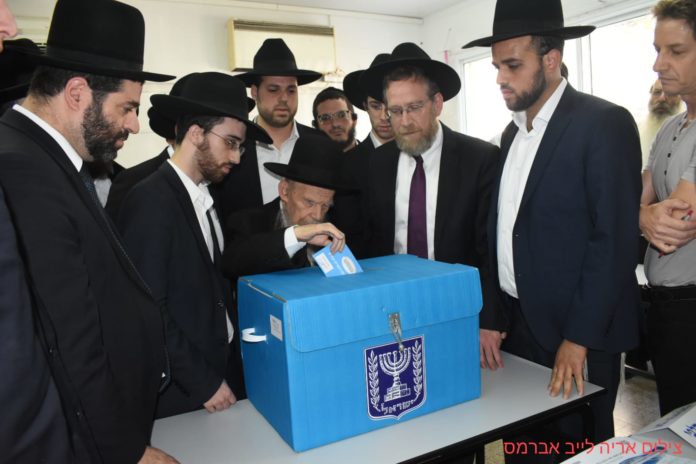 As the clocked counted down the minutes to the initial exit polls at Blue and White Party headquarters, its leaders headed out into the “field,” taking to beaches and shopping centers across central Israel urging potential voters to the ballot box.

“There was a real sense that they needed to incentivize people because the voter percentage in Tel Aviv was low in the morning,” a party source told JNS this evening. “They also worked the phones and gave marathon media interviews.”

Initial exit polls show both Blue and White and the Likud Party on top as the two largest parties as expected, with between 30-34 seats for each party depending on the poll. However, neither party seems to have a clear path to a 61-seat Knesset majority without a coalition with Yisrael Beiteinu, which the exit polls show around 9-10 seats.

Responding to the exit polls, Blue and White Knesset Member and former Tel Aviv deputy mayor Asaf Zamir told JNS, “We are cautious and we have learned from the past, we are waiting for real results. But if these are the indications of the trend, Bibi Netanyahu failed, for the second time. He doesn’t have 61 recommendations in his pocket. The president said he would ask the biggest party to form the government, and we are expecting that. There will be a complex political process. I hope it will end well.”

Unlike the April elections, Blue and White’s leaders—former Israel Defense Forces’ Chief of Staff Benny Gantz, former defense minister Moshe Ya’alon, former IDF chief of staff Gabi Ashkenazi and Yesh Atid Party leader Yair Lapid—will arrive later at the party headquarters, located at a hanger at Tel Aviv Port, rather than earlier, to get as accurate a sense as they can of the initial voting picture.

This is a lesson drawn from the April election rounds when the party leaders prematurely declared victory based early television exit-poll figures—a victory that never materialized.

The atmosphere at the party’s headquarters was one of a tight race.

National and international media poured into the hanger in the evening, flooding the center stage with bright lights, cameras and mobile panels as the country waited for initial exit polls to come in.

The only likely realistic path for Blue and White to enter the government is by forming a unity government with Likud; its leaders are therefore hoping for that outcome, according to Yohanan Plesner, president of the Israel Democracy Institute.

Is Israel headed for a national unity government?

If Israeli Prime Minister Netanyahu fails to form a coalition with his natural allies—the right-wing and ultra-Orthodox parties—and Gantz also fails in forming a government, Israel would enter “uncharted territory in terms of Israel’s political history,” said Plesner, referring to the potential scenario of a third consecutive round of elections. “We know how we would come into this situation, but we do not know how we would come out of it.”

Blue and White seeks a unity government scenario “mainly because it’s the only realistic option of leading the government,” he assessed.

Gantz would face an enormous struggle in trying to form a center-left government that shuts out Likud. Such a coalition would be made up of extremely unlikely partners, like Avigdor Lieberman’s Yisrael Beiteinu, Arab-Israeli parties and Meretz.

“This is not a coalition that can hold together,” argued Plesner. “Gantz would need either Likud or the ultra-Orthodox parties—and then Lieberman won’t come in. So the numbers don’t really add up. It will be very difficult for him to form a government that is not a national unity government.”

In addition, Blue and White’s promises constitute a “sort of ceasefire when it comes to internal domestic divisiveness,” said Plesner. This includes the party’s position on maintaining the status quo on matters of religion and state, and its lack of a far-reaching agenda when it comes to the Palestinians beyond a possible freeze on remote settlement construction.

The party is therefore naturally suited for a unity government, “both from a political and an ideological standpoint,” he added.

Both Blue and White and Likud can be expected to respond to the upcoming Trump administration’s peace plan with a “yes, but,” according to Plesner.

Ultimately, the main outcome of the elections will be decided by whether or not Netanyahu can form a narrow coalition with the ultra-Orthodox and right-wing parties or not, he stressed.

“We might know within a few hours—and we might not know—whether the prime minister is able to form a right-wing government, which would override the other scenarios. This is, of course, the preferred scenario for Netanyahu, mainly because of his legal woes,” said Plesner.

Earlier on Tuesday, Blue and White announced that its official website was exposed to “a significant cyberattack,” of the distributed denial of service (DDOS) type. “Over 500 attempted attacks have been identified from various servers abroad. The estimated cost of the attack is estimated at tens of thousands of shekels,” the party said in a statement. JNS.ORG