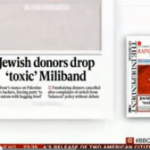 A late-night BBC television news broadcast about the disillusionment among Jewish donors with Britain’s Labour Party leader Ed Miliband quickly degenerated into an exchange of anti-Semitic tropes, as the program host and a panelist speculated about the impact “prominent Jewish faces” would have on party policy both at home and in the Middle East.

The panel had been discussing the headline on the November 8 edition of The Independent newspaper, which read: “Jewish donors drop ‘toxic’ Miliband.” As The Algemeiner reported last week, Miliband, who is Jewish, has been facing growing criticism from within the Jewish community since Maureen Lipman, a leading British Jewish actress, declared she was abandoning the party after the Labour leader gave his backing to British recognition of a Palestinian state independently of any negotiations with Israel.

Panelist Jo Phillips, billed as a “BBC political adviser,” began with a forthright, if inarticulate, defense of Miliband, saying: “You’re not supposed, apparently, to say anything anti-Israeli, um, and if you attack Israeli political, um, policies or the government policies, then you know, this is what you get. Um, you know it seems to me that it is totally hypocritical that on the one hand they are now going to have to look perhaps to the unions to get some funding, but will be accused of being in the unions’ pockets, and when he’s being brave and principled and standing up and saying, you know, ‘this time Israel has gone too far’ um, people take their money away, so he can’t win, can he?”

Phillips was speculating that Miliband would be forced to turn to labor unions for financial support if rich donors were to withdraw backing from the party. But presenter Tim Wilcox then decided to take the conversation in a different direction. “A lot of these prominent Jewish faces will be very much against the mansion tax,” Wilcox said, singling out Maureen Lipman as an example – the tax refers to a Labour proposal for an additional tax on properties worth $3.5 million or more.

“The idea that a wealthy Jewish lobby seeks to use money to manipulate political policy is a centuries-old antisemitic trope,” Jonathan Sacerdoti of the UK’s Campaign Against Antisemitism, which has complained to the BBC about the broadcast, told The Algemeiner. “The BBC’s unchallenged promotion of this slur is shocking and causes many Jews to feel threatened and persecuted by the broadcaster.”

Sacerdoti added: “The BBC claimed that the ‘Jewish lobby’ is thwarting a ‘principled’ foreign policy position, but there is no factual basis for this accusation. Also, with no evidence at all, the BBC claimed that wealthy Jews are challenging taxation proposals to hang onto their mansions.”

The broadcast was also heavily criticized by the Community Security Trust (CST,) the official security body of the UK Jewish community.
“The BBC host Tim Wilcox then went a bit further, suggesting that ‘a lot of these prominent Jewish faces will be very much against the mansion tax,'” wrote the CST’s Mark Gardner on the organization’s blog. “His two guests responded that non-Jews oppose the mansion tax also: but, as with the original article, the stench of toxic assumptions about Jews and money / influence for Israel was now out there.”

Gardner concluded: “There is no widespread revulsion at this, because such slurs are seldom directed at Jewish individuals, made at Jews qua Jews: simply for being Jewish. So, they lack the ugly obvious racism spewed by neo-Nazis…It is still, however, a very slippery slope, liberally oiled with deep seated antisemitic toxins about Jews acting in concert with other Jews: whether that is in Glasgow, Westminster or Washington.”

Watch a video of the panel discussion HERE.