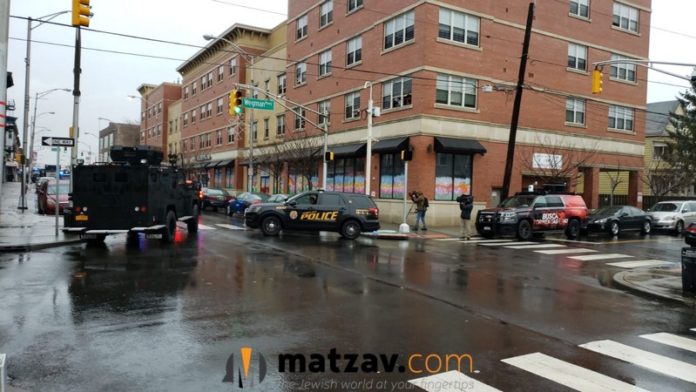 I received a phone call early this morning.

It was from Mayor Hector Lora the mayor of Passaic.

I consider Mr. Lora a good friend, a sensitive individual and a caring man.

He was my first phone call today.

He said that he had heard that the horrific attack in Jersey City was no random attack as first was reported, rather, it was a targeted anti-Semitic incident.

He then informed me that although there is no credible threat against the Jewish community in Passaic, he is placing a mobile police command center in front of the Shul on Van Houten Ave.

He mentioned that as the most frequented Synagogue in the city, he wanted to make sure, “That everyone should feel safe to pray…:”

I thanked him profusely for his care, for his initiative to help protect us and his concern for our safety.

Mayor Lora then contacted me again to emphasize that although the Mobile Police Command Center (the largest and most advanced anti-crime vehicle in the Passaic Police force) will be stationed in front of the Shul, nevertheless, he wanted me to emphasize to all that there is no specific information that the Passaic Jewish community is under any direct threat.

I thanked him again.

I grieved for the family’s of Moshe Hersh Deutch HY”D, 24-years-old from Williamsburg and Mrs. Leah Mindel Ferentz HY”D, 33-years-old who were murdered in cold blood yesterday.

Numerous sources have reported, “The Mayor of Jersey City has asserted that today’s incident was a deliberate attack targeting the Jewish community.”

It is not like Bloomingburg, NY which is “tranquil and has a rustic ambience”.

It is not like Toms River or Jackson New Jersey.

It is certainly not like East Ramapo near Monsey.

Greensville, Jersey City is an urban area primarily made up of Blacks and other ethnic minorities.

Along the avenue are a Catholic church, a mosque and a storefront church called the Sanctified Church of J.C.

Despite the presence of these houses of worship of three different faiths, as soon as Jews moved in

A zoning change was enacted forbidding new houses of worship.

Michele Massey, a former Jersey City councilwoman who is the executive director of an organization that oversees a commercial corridor along Martin Luther King Jr. Drive, said Hasidim had opened a synagogue on the avenue despite a recent zoning change forbidding new houses of worship.

“It’s not because they’re Jewish,” Ms. Massey said of her opposition. “It could have been any other religion or group. It was simply the zoning law. I’m a person of color. Obviously I don’t care who lives where.”

I fail to understand Ms. Massey’s assurance that, “It could have been any other religion or group. It was simply the zoning law”.

I have other questions which disturb me.

I am baffled by the question, “Why do our fellow Americans want to ban us from living in Greensville, East Ramapo, Jackson Township and Toms River?”

I wondered after I read a statement, “Mayor Steven Fulop wrote that an “extensive review” of the city’s closed-circuit cameras made it clear “that these two individuals targeted the kosher grocery location” – why would anyone target a kosher grocery?

I had no answer.

After the phone call from the Mayor, I went back to my study of the Parsha with the commentary of Rashi.

“And Esau ran toward him and embraced him, and he fell on his neck and kissed him, and they wept.”