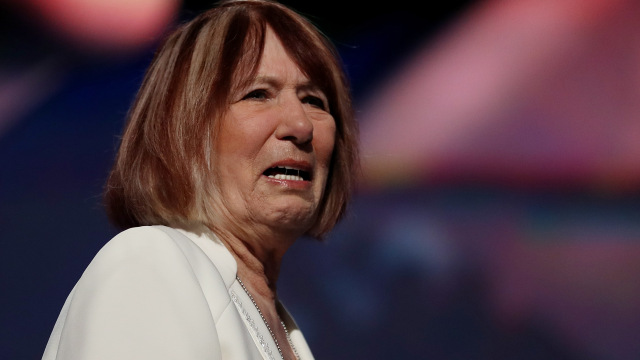 This afternoon, Patricia Smith — the mother of Sean Smith, an American killed in 2012 at the U.S. diplomatic compound in Benghazi, Libya — appeared on CNN to discuss Donald Trump’s attacks on the family of the late Capt. Humayun Khan, the Daily Beast reports.

“I think that anybody that loses a child should be allowed the grief that goes along with it,” Smith said, at first defending the Khans. “When you lose your child, that’s all you can think about, and you shouldn’t have anybody telling you you can’t think that way.”

However, when asked by CNN anchor Brooke Baldwin about the appropriateness, or lack thereof, of Trump’s recent comments, Smith defended Trump.

“I’m not gonna tell anybody what they should say,” she said. “If that’s the way [Trump] felt, that’s his business to say that.”

Though Smith reiterated that she does not believe that “anybody should say anything about [grieving families],” she refused to call on Trump (“The Donald,” as she called him) to apologize.

“No, I don’t,” she said, when asked if he should issue an apology. “That’s what he believes.”

Smith, who personally blames Hillary Clinton for the death of her child, again made clear her antipathy to the Democratic nominee during her appearance on CNN, stating that Clinton “kills people.”