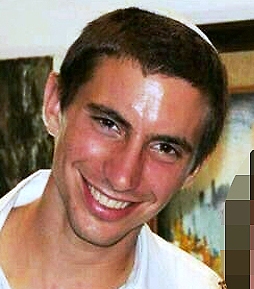 The rehabilitation of Gaza should be made conditional upon the release of the bodies of two Israeli soldiers held by Hamas in Gaza, the parent of one of them told The Algemeiner on Tuesday.

Leah Goldin, mother of 23-year-old IDF lieutenant Hadar Goldin – who was abducted and killed by Hamas terrorists during Operation Protective Edge in the summer of 2014 – was referring to the campaign she and her husband have been waging to persuade the international community to assist in the effort to bring her son’s remains back to Israel for burial.

The “million-dollar question” she said she is asked every day is whether progress has been made on this score.

“From our perspective, true progress will have been achieved when the ordeal is over,” she said, speaking from her Kfar Saba home following the opening ceremonies of Yom Hazikaron, Israel’s Memorial Day for fallen soldiers and victims of terrorism. “But the path to this goal is extremely complicated, because we are dealing with a very cruel enemy.”

She went on: “If I were to try and objectively specify some degree of progress, however, it would be that about a month ago, Hamas released a video claiming they were holding four Israeli soldiers captive. They named Hadar and Oron Shaul [who was captured and killed in a separate incident during the conflict], along with Bedouin Israeli Hisham Al-Sayed and Ethiopian-Israeli Avraham Mengistu [a mentally unstable man who crossed over into Gaza last September]. They photo-shopped all of them wearing IDF uniforms to support their claims. The reason this constitutes ‘progress’ is that at least Hamas is admitting to holding Hadar. This is not something to be taken for granted, since usually the terrorist group demands ransom in the form of the release of terrorists from Israeli prisons even for providing that level of fact.”

This indicates, said Leah, CEO of Golden Solutions, a consulting firm specializing in system and software engineering, “that something is moving, likely in the direction of demanding something in return for the young men.”

The defense establishment, she said, has not only been keeping her and her husband, Simha – an historian who happens to be related to Defense Minister Moshe Ya’alon – in the loop, but “has been behaving in an exemplary manner towards us and the Shaul family, meeting with us whenever we want and updating us to the extent that they are able, barring top-secret issues that we can’t be privy to. Everyone, from the prime minister to the defense minister to high-ranking IDF commanders, has been in contact. There is a feeling that there is a process going on and a genuine commitment to bring the boys back home.”

Goldin said that the government and military “are doing their job. Ours, however, involves the civil sphere,” referring to the work she and her husband have been doing to raise awareness abroad and enlist the international community in their efforts.

“We have been to New York twice, and hope to go again in September to present our case before the UN General Assembly,” she said. “The whole world is fed up with terrorism, which is why it can be receptive to our plea to find the best way of solving the issue. Neither Israel nor the US has formal relations with Hamas. We thus need the assistance of the international community to help ‘motivate’ Hamas to return the boys, not use them as a weapon — a weapon that hits us directly in the heart.”

Goldin said that another reason for appealing to the United Nations is that her son was killed on August 1, 2014, during an international cease-fire, brokered by US Secretary of State John Kerry and UN Secretary-General Ban Ki-moon.

“Hadar was therefore a victim of a cease-fire, not of a war,” she said. “And since it was a cease-fire, the IDF wasn’t firing, and Hamas ambushed our boys.”

Hadar Goldin, the IDF lieutenant who was kidnapped and killed by Hamas on August 1, 2014.

Goldin said she and her husband “still haven’t managed to meet with Kerry or Ban,” though on Feb. 5 — accompanied by Israeli Ambassador to the UN Danny Danon – they met with UN Assistant Secretary-General for Peacekeeping Operations Edmond Mulet.

“Mulet was very understanding,” she said. “He said it is a duty to return the bodies – a humanitarian necessity. And Ban released a statement that Hamas must return the bodies, naming Hadar specifically.”

Goldin explained the “linkage” she is trying to create “between two humanitarian considerations.”

“Until now, Hamas has abducted soldiers and demanded a heavy price from Israel for their release. The time has come to turn that equation on its head. Rather than waiting for Hamas to demand a price from Israel, a price from Hamas must be exacted for not returning the bodies,” she said. “Today, the whole world, including Israel, wants to rehabilitate Gaza. But, we need to attach a condition to it – to return the bodies of Hadar Goldin and Oron Shaul.”

When challenged that Hamas has not shown any interest in rehabilitating Gaza, using construction materials paid for by the international community to repair terror tunnels destroyed in the war and build new ones, Goldin agreed that this is a problem the world is facing, “which is why we need to act together.”

Goldin did not want to commit to an answer about how she would react if she got her wish to return her son’s remains through a prisoner-swap deal between Israel and Hamas – like the one in 2011, which led to the exchange of 1,027 Palestinian terrorists for abducted IDF soldier Gilad Schalit, who had spent five years in Hamas captivity.

“I say that Hadar needs to be brought back to burial in Israel,” she replied. “He did his duty on behalf of the state, to defend the country, and the highest value of the IDF is not to leave soldiers behind in battle – alive, dead or wounded. How this is ultimately resolved is not our business. No parent in our position can turn this issue into a symposium.”

However, she stressed, “This is why, in principle, we are trying to show that there is another way of going about it – a way that may be hard for Israel to accomplish because of international pressure, so we’re approaching the international community. The problem is that if we wait too long, Hamas could get the upper hand and determine the price.”

Goldin concluded by talking about her bereavement. “Here we are, on the second Memorial Day since Hadar was killed, and we still can’t fathom it,” she said. “So we find energy in his legacy, his artwork – which has been exhibited at various venues, and soon-to-be shown at the Park Avenue Synagogue in New York City – and his Jewish-flavored writings. We also hear about the values he spread from the kids he mentored in the Bnei Akiva youth movement and from the soldiers he commanded.”

It is such values, she said, “that we have to decide will win, since the war against terrorists is ultimately a war over values. We have to dictate our values and force the hand of this cruel enemy who has no values whatsoever, who glorifies death instead of life.”

Hadar was survived not only by his parents, but by his twin brother, Tzur, his older sister Ayelet, his older brother Hemi and his fiancée, whom he was scheduled to marry mere weeks after the day he was killed.