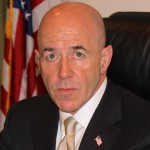 “The further we get away from Sept. 11, the more complacent we get, the less vigilant we get,” Kerik, who commanded the city’s force during the attacks, told “The Hard Line” host Ed Berliner. “It takes unfortunately horrific reminders for us to get back into focus.

“The problem is we lose our vigilance the further we get away from these events,” Kerik added. “We have to realize this enemy’s here to stay, it’s not going anywhere and we’ve got to fight it.
Latest News Update

But terrorism fears should not become so overbearing that it stops Americans from celebrating the Thanksgiving Holiday Weekend, Kerik said.

“We want people not to be numb, to be vigilant, but we also want them to go about their business.

“I’m going to have my kids. If they want to go to the Thanksgiving Day Parade in New York City, they’re going,” he told Berliner. “If I want to go out shopping or to a restaurant, we have to get beyond this fear.

“The reality is there’s a threat there that we have to face, a reality of it — and we have to live our lives,” Kerik said. “Because if we don’t, we cower and we give into the terrorists and what they really want.”