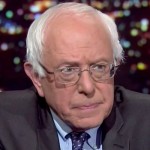 Despite VP Joe Biden’s plea for the next president not to “undo” the legacy of President Obama, Democratic candidate Bernie Sanders told MSNBC Wednesday that his presidency would be a “course correction.”

During an interview with Chris Hayes, reports the Daily Beast, the self-described democratic socialist confessed that while he is a “personal friend” of Obama and Biden, Sanders wants a “political revolution” to undo the current power structure controlled by “corporate America and the Koch brothers and the corporate media.” This is obviously at odds with how major-party presidential candidates tend to wholeheartedly tout their predecessor’s record as part of their campaign.