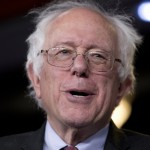 Presidential candidate Bernie Sanders criticized Israel’s actions during the 2014 Gaza war, saying in an interview published Wednesday that the Jewish state caused more civilian damage than was necessary in the Palestinian enclave.

Sanders, a Vermont senator who is vying against Hillary Clinton for the Democratic nomination, told Rolling Stone that the US should support Israel’s security and independence, but that as the first Jewish president, he would “maintain an evenhanded approach to the area.”

“I believe in a two-state solution, where Israel has security and the Palestinians have a state of their own,” Sanders said in answer to a question on how his administration would approach Israel. “The United States has got to work with the Palestinian people in improving their standard of living, which is now a disaster, and has been made much worse since the war in Gaza.”

Sanders said that Prime Minister Benjamin Netanyahu “overreacted” during the 50-day Israel-Hamas conflict in the summer of 2014. “War is terrible unto itself. But I think that Israel overreacted and caused more civilian damage than was necessary. They have very sophisticated weapons systems. They make the case, and I respect that, that they do try to make sure that civilians are not damaged. But the end result was that a lot of civilians were killed and a lot of housing was destroyed. There was terrible, terrible damage done,” Sanders said.

According UN’s Office for the Coordination of Humanitarian Affairs, which based its figures on a variety of local and international sources, a total of 2,220 Palestinians and 72 Israelis were killed in the 2014’s Gaza conflict between the IDF and the Hamas terror group which rules Gaza.

The UN accepted the Palestinian death count, which said that 65% of the dead in Gaza were civilians. An Israeli internal report found the rate of civilian deaths to have been 56 percent, supporting Israel’s stated emphasis on proportionality and discernment during war. Israel blames all of the civilian deaths in Gaza on Hamas, which it claims fights from within civilian areas and uses women and children as human shields.

Sanders refused to sign a Senate resolution in summer of 2014 that blamed only Hamas for the fighting. At a town hall in Cabot, Vermont, during the conflict, Sanders answered a constituent who asked him to “go further” by criticizing both Israel and Hamas.

“Has Israel overreacted? Have they bombed UN facilities? The answer is yes, and that is terribly, terribly wrong,” Sanders said at the time.

“On the other hand — and there is another hand — you have a situation where Hamas is sending missiles into Israel — a fact — and you know where some of those missiles are coming from? They’re coming from populated areas; that’s a fact. Hamas is using money that came into Gaza for construction purposes — and God knows they need roads and all the things that they need — and used some of that money to build these very sophisticated tunnels into Israel for military purposes.”

When hecklers interrupted, some with epithets, Sanders shouted them down.

“Excuse me, shut up, you don’t have the microphone,” Sanders said. “You asked the question, I’m answering it. This is called democracy. I am answering a question and I do not want to be disturbed.”

In the Rolling Stone interview, Sanders also said that his Jewish heritage, including the knowledge that much of his father’s family was killed in the Holocaust, played a big role in drawing him toward politics as a child.

“So what you learn, not intellectually when you’re seven years of age, but it goes into your emotional, instinctual base, is that politics makes a difference,” Sanders said. “Hitler and the Nazis were elected to office in Germany. And 50 million people died in that war, including 6 million Jews.”

Sanders compared the Jewish relationship with politics to that of African-Americans, who he said pay attention because of their experiences with racism, including segregation and lynching. “And that’s why African-Americans are very sensitive to what goes on in politics”, Sanders said. “And the same thing with Jewish people. That is how, instinctually, if you like, or emotionally, I gravitated into politics.”