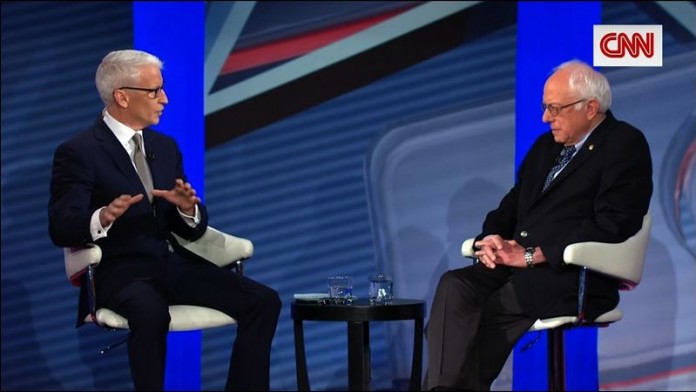 Six days ahead of the New Hampshire primary, Sen. Bernie Sanders on Wednesday night opened up about his personal life and background, telling voters at a televised town hall that faith is “a guiding principle in my life, absolutely it is.”

“You’re Jewish, but you’ve said that you’re not actively involved with organized religion,” Anserson Cooper asked Sanders, the Independent senator from Vermont vying with Clinton, the former secretary of state, for the Democratic presidential nod.

“Everybody practices religion in a different way,” Sanders, who is Jewish, said at the CNN town hall in Derry, New Hampshire. “I would not be here tonight, I would not be running for president, if I didn’t have very strong religious and spiritual feelings.”

He explained his spirituality this way: “I believe that as a human being, the pain that one person feels — if we have children who are hungry in America, elderly people who can’t afford their prescription drugs — that impacts you, and that impacts me….My spirituality is that we are all in this together.”