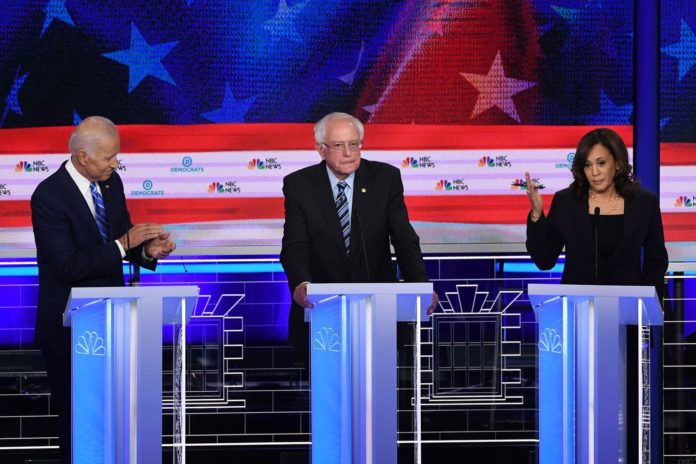 Former Vice President Joe Biden and Sen. Kamala Harris, who clashed at the first Democratic debate, will face off again in the next two-night debate at the end of July, while the ideologically aligned Sens. Bernie Sanders and Elizabeth Warren will appear together the other night.

Who is matched with whom can shift the trajectory of the race, as Harris, D-Calif., showed in the first debate when she went after Biden on the issue of busing and race. It created a Harris vs. Biden narrative and helped catapult Harris toward the top of the national polls. The aftershocks of that moment were felt for days, culminating in Biden giving a major speech defending his civil rights record.

A rematch gives Harris another shot to handicap Biden, while Biden gets an opportunity for a do-over after his fumbling performance against Harris last time.

For democratic socialist Sanders, I-Vt., and capitalist Warren, D-Mass., who are vying for many of the same far-left voters, the matchup allows them the chance to differentiate. It also denies Sanders a chance to go after Biden, whom he competes with for the populist and working-class vote. In the past week, Sanders has targeted Biden for not embracing Medicare-for-all, providing a preview of how hard he planned to go after Biden if given the opportunity.

The Democrats wanted to avoid having separate first-tier and second-tier debates like Republicans did in 2016, so they chose to randomly divide the field over two nights. In the first debate, June 26, all the top-polling candidates except for Warren were drawn for the same night.

This time, the candidates were divided into three tiers, and each tier was split between the two nights in an effort to ensure that the nights were balanced. Biden, Warren, Harris and Sanders were in the top tier based on their poll rankings, guaranteeing two top candidates would debate each night.

The Democratic field is the most diverse ever, yet all five minority candidates ended up on the same night. If Harris does go after Biden again on race issues, he could face a pile-on with Booker onstage as well. Booker was the first candidate to take Biden to task for his comments about working with well-known segregationists early in his career.

O’Rourke, who raised a huge amount of money in his first 24 hours in the race, lost his early momentum while Buttigieg, who raised the most money of any candidate in the second quarter, surged. O’Rourke may try to recapture the mantle as the face of the next generation. Buttigieg, meanwhile, will have an opportunity to position himself as a pragmatist versus the more liberal Sanders and Warren.

The entry qualifications for the third debate in September will roughly double, and candidates will be required to make the cut in both polling and donors, not simply one category. No debate is scheduled for August.